Bucharest, like many capital cities in Eastern Europe, is often overlooked. When I told people I was going to Bucharest, they asked me, “Why would you go there?”. Even in Romania, passing travelers told me to skip it. I didn’t have a choice, I was flying out from Bucharest and ending my three-month long Balkan adventure.

I loved it. In fact, I wish I’d had more time there.

Bucharest at first looks like a post-apocalyptic Paris but is very much alive. This inexpensive city is a great weekend getaway or the beginning of a trip through Romania.

To do in Bucharest:

Visit the Palace of Justice

With over 1100 rooms, the Palatul Parlametului, or Palace of Parliament, is Bucharest’s most iconic building. It’s not the biggest building in the world, but it is the heaviest, made with thousands of tons of Romanian marble. Designed in powerful Stalinist architecture, the 3 billion euro building was commissioned by President Ceausescu.

The building was inspired by the Palace of the Sun, following Ceausescu’s visit to North Korea. The construction bankrupted the country, and the Ceausescu regime was ousted before the Palace was completed.

The Palace’s regal halls host government and private events, such as balls and weddings.

Some parts of the old town may feel like Paris or Vienna. This is because of the neo-Renaissance and Eclectic-style architecture. But after a few hours, you’ll realize Bucharest is one of a kind.

Wander through the Pasajul Villacros, through the University square or down Lipscani street. These areas are full of energy, shops, cafes, and impressive buildings. Visit the ruins of ancient Bucharest, the tiny Stavropoleos church, and look out for the statute of Vlad Tepes, the merciless man who inspired Dracula. 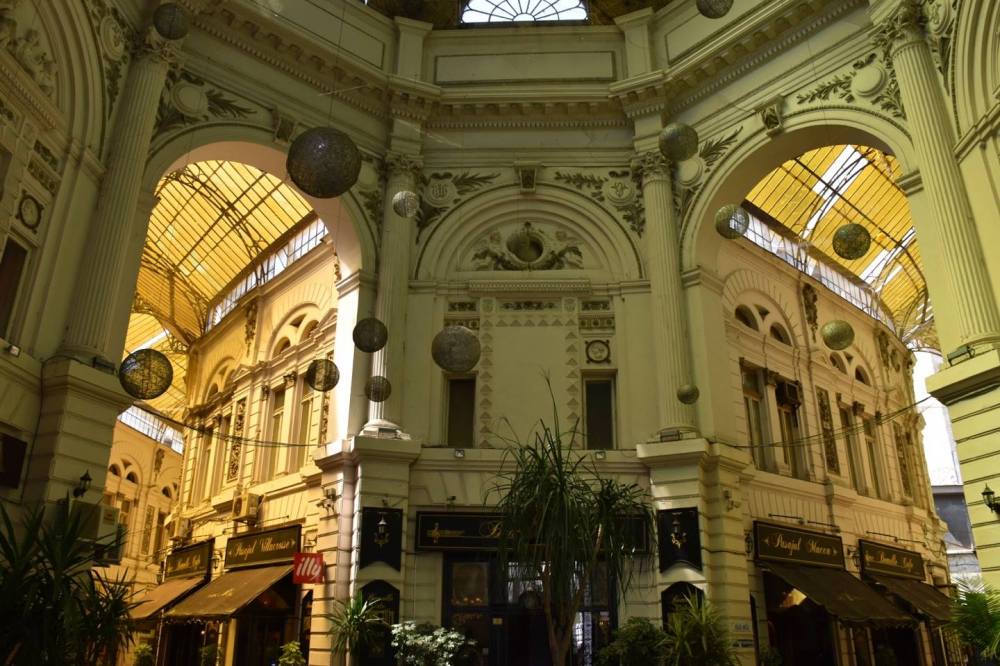 The ornate Western-European buildings are perfectly contrasted with Communist block housing and street art. In the quiet Armenian quarter, there are even more interesting buildings, inexpensive restaurants, and antique shops.

A taxi driver in front of the CEC Palace. 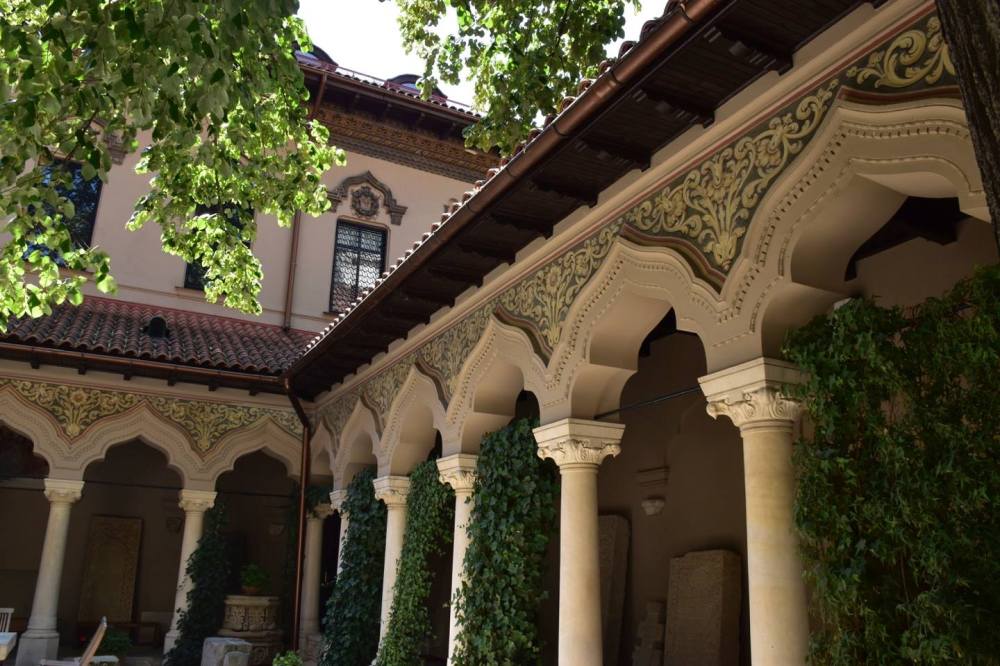 The ornate arches of the tiny Stavropoleos church, an Eastern Orthodox nunnery, built in Brâncovenesc (A mix of Venetian and Ottoman) style.

From 1967 until 1989, Romania was ruled by communist leader ‘President’ Nicolai Ceausescu and his wife, Elena. Their residence, The Palatul Primaverii, or ‘Spring Palace’, is opulent in every way, boasting a mosaic-tiled swimming pool, indoor and outdoor gardens with peacocks, golden everything, and over 80 rooms filled with classic Renaissance furniture.

The Ceausescu family and the Romanian revolution are essential parts of Romanian history, so this site should not be missed! The Spring Palace can only be visited with a guided tour, so make sure to reserve a time online before going.

After the tour, hang out in the yard with the family’s 5th generation of peacocks.

Dine at its famous restaurants:

Caru cu’Bere  (literally ‘Beer Cart’) is a three-floor tavern inside this stunning gothic-revival building. Near the Stavropolous church in the old town, Caru cu’Bere is a perfect mid-day pit-stop or nighttime hangout.

Be sure to try some salty, garlicky snacks like fried Cascaval cheese and stuffed mushrooms. Afterwards, wash it down with a pint or two of local beer. 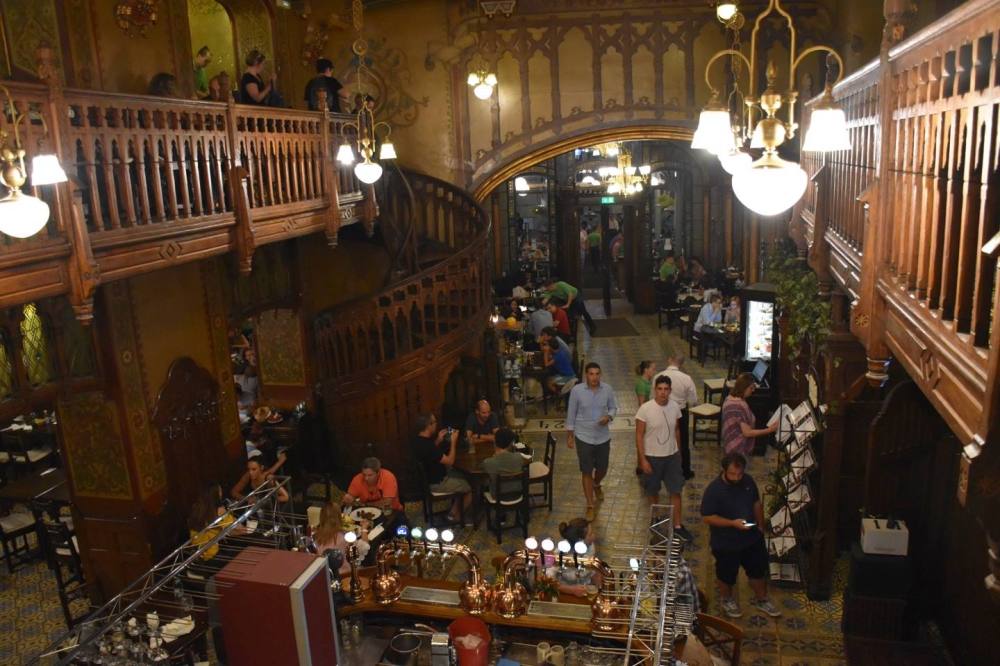 This historic Hanu’lui Manuc, or ‘Manuc’s Inn’, was originally a caravanserai, or hotel for Ottoman traders, and became a major landmark in Old Bucharest. It became a popular meeting place for government officials, and many treaties were signed here, such as the Treaty of Bucharest, which gave Moldova to the Russian Empire and granted Serbia independence from the Ottomans.

Today is it one of the nicest restaurants in Bucharest. Choose from a long list of fine and traditional Romanian dishes, from hot stews to spicy goulash, charcuterie platters, and the fresh catch-of-the-day ragout. There are plenty of delicious soup and vegetable options for my fellow vegetarians/vegans as well. 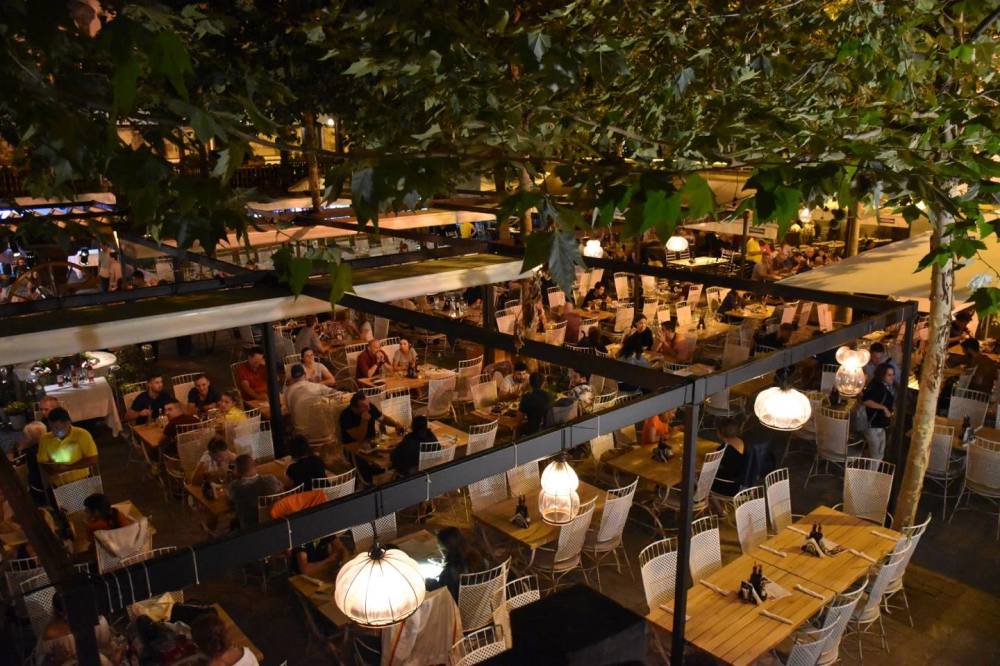 Most activities, food, and lodging in Bucharest are very inexpensive, so treat yourself! Manuc’s Inn makes for a great last night in the city. Split a bottle of Wallachian wine with friends and enjoy the atmosphere.

In Bucharest for more than a few days? There are many nearby day trips out of the city offered by tour companies. All of these places can also be reached via public transportation and are within a 1.5-hour radius. Also, both of these sites are free to enter.

This quiet monastery, located on an island in the middle of Snagov Lake, was founded in the early 15th. It is regarded as the final resting place of Vlad Tepes, the infamous ruler who inspired Bram Stoker’s Dracula.

Less than 10 miles from Bucharest, this Brancovenesc estate sits on several acres of marshland. The surrounding gardens and parks are full of Romanian flora and small ponds. The palace was built in the early 1700’s for the Prince of Wallachia, Constantin Brancoveanu.

Inside the palace walls, there is an art museum, a small church, a watchtower, and several restaurants.

There are several more restaurants and bars in the small town of Mogosoaia, at the end of this long boulevard.

Whether you’re in Bucharest for 2-3 days, or in Romania for an extended period of time, be sure visit these sites! Bucharest is truly an underrated city, with its diverse architectural styles, delicious food, vibrant bar scene, and tumultuous history.

Romania is a land of wonder, full of castles and palaces, and its capital, Bucharest, is not to be overlooked!