Ohrid, a town in the Former Yugoslav Republic of Macedonia, is a popular tourist destination for Eastern Europeans, for its affordability and range of activities. The entire town and lake of Ohrid are UNESCO World Heritage sites, for their ancient cultural significance and natural beauty.

Here are a few things to do in Ohrid:

Overlooking Lake Ohrid, Samuel’s Fortress provides stunning views of the town and surrounding areas. The fortress dates back to the 10th Century when Ohrid was the capital of the First Bulgarian Empire.

Only the walls and towers of the fortress remain, but it is still worth the visit for the view. Samuel’s Fortress is also close to a small Greek amphitheater.

Ohrid is an excellent place to paraglide because of its natural beauty and gentle winds. I’d never done this before and was a little nervous at first, but completely loved it. I felt like a seagull, flying for the first time, and can’t wait to do it again.

Takeoff was completely smooth; one minute I was running and the next minute my feet were lifted off the ground. You can see the not-so-bright look of surprise on my face as we took flight!

Ohrid has a church for every day of the year, even February 29th. Some of the town’s 365 churches are from the Byzantine-era, built in brick and stone. The Church of Saint. John the Theologian, which overlooks the Fisherman’s Colony and Kaneo beach, is one of most famous and picturesque. It’s even smaller than it looks.

There are other churches worth visiting for their beautiful paintings and gardens such as Saint Sophia and Saint Clement, which are in the old town.

Have a drink in the ‘Fisherman’s Colony’

This area of the old town has been converted into a relaxed bar scene with lakeside seating. It’s a great spot to hang out and watch the boats sail by. Older fisherman can still be seen catching fish, but most of them have realized offering boat tours is more profitable! 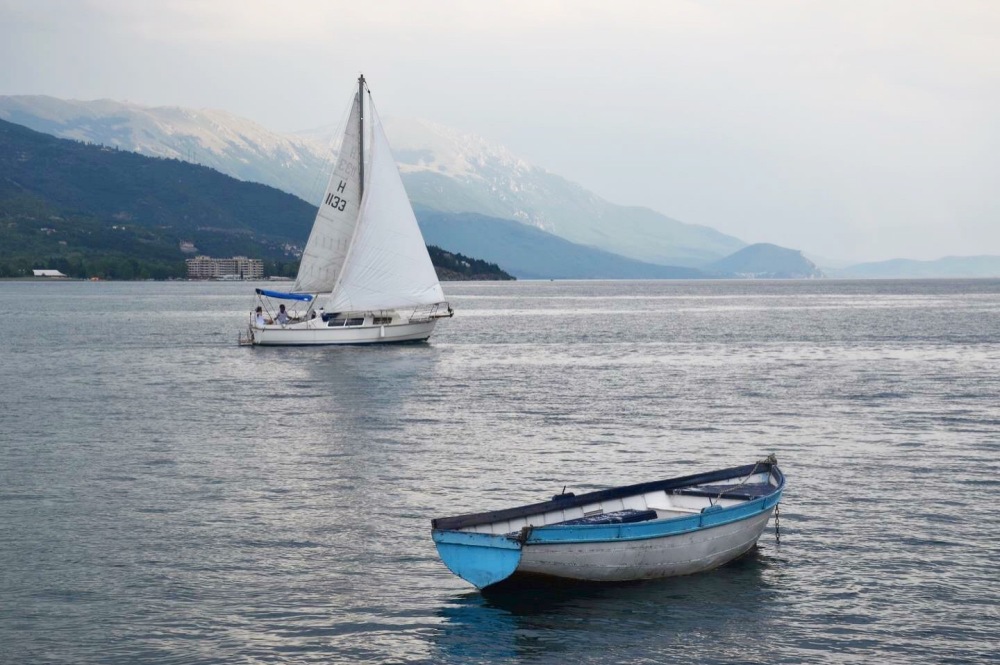 Walking along the boardwalk from the Fisherman’s colony will take you past the old town and back to the center.

Macedonian Cuisine is a blend of Balkan, Mediterranean and Turkish, with many roasted meats and stews. My fellow vegetarians/vegans, you’ll be happy to know that Macedonia’s national dish, Tavče gravče, is vegan: the ingredients are just beans, onions, oil, salt, pepper, and parsley. It’s hearty, delicious and can be found on every menu. 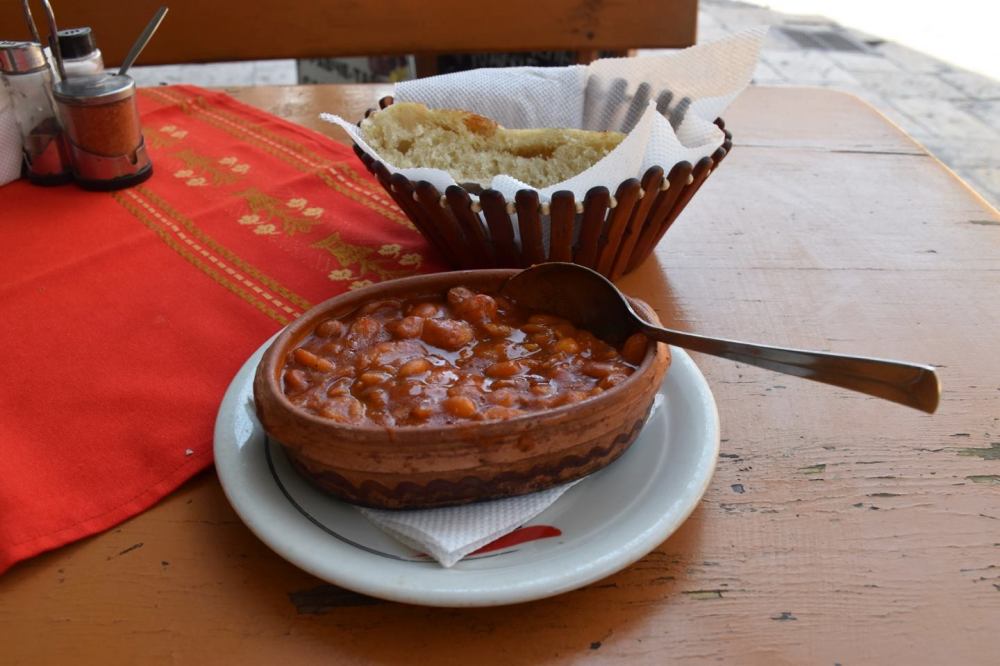 In addition to the many restaurants, there are food trucks in the waterfront parks. Sit on a park bench or on the docks and enjoy fried donuts, roasted corn, or grilled skewers.

Deeper into town, there are many boutiques and sweet shops with many flavors of baklava and other treats. Traditional clothing, handicrafts, and Balkan spirits such as rakija can also be found here.

Haven’t seen enough of Ohrid’s churches? The Monastery of Saint Naum is a large complex located only a short taxi ride away from Ohrid. The monastery is one of the most visited sites in the country. Peacocks are a symbol of Macedonia and appear on the currency, as well as in the garden of Saint Naum.

Pure spring water bubbles out of the marsh behind Saint Naum’s Monastery. The river’s waters are drinkable and ice-cold even in the middle of summer. 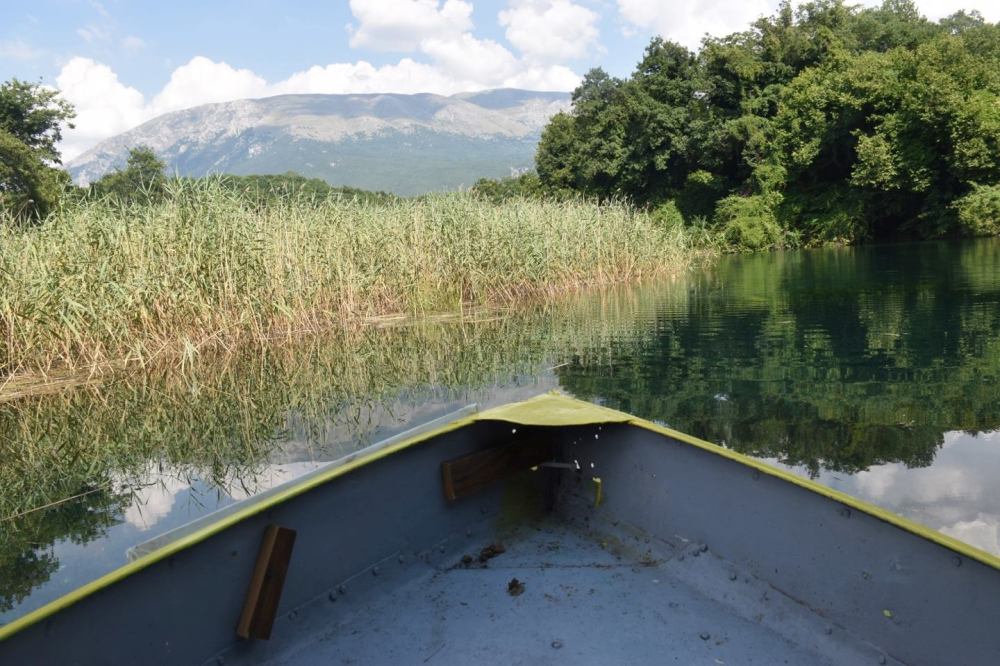 Local Macedonian teens offer rowboat tours here for very low prices, and I highly recommend taking one around the area. There is also a floating restaurant that slowly moves around the marsh as patrons enjoy their meal.

Yugoslavia produced thousands of these tiny cars in the 1970’s. Zastava Koral’s, or “Yugo’s” are becoming rarer and rarer in former Yugoslavia, however, there are many in Ohrid. The Yugo is frequently referred to by car experts and magazines as the “worst car ever”, making them somewhat of a novelty.

I think they’re adorable, but I’ve never driven one, so who am I to judge!

A few days in this charming town are a perfect amount of time to visit its many churches, take a boat on the lake and natural springs, or even try paragliding. One could stay even longer just to relax by the clear water and enjoy the local cuisine. There’s always something to do in Ohrid, the Pearl of the Balkans.

Lake Ohrid is roughly 4 hours from the capital, Skopje, and 3 hours from Albania’s capital, Tirana. Ohrid has an airport of its own as well, with many discount flights from all over Europe each day.