I know, this is a really specific thing to write about, and it seems odd to go all the way to India to see some churches built by the Portuguese. But that’s the kind of silly stuff I do.

I was in Goa for a week, and there isn’t a ton to do other than party and go to the beach.. so after a few days, I found myself craving some history and culture.

Goa was a Portuguese colony from 1510 until 1965, despite India’s independence from Britain in 1947. The Portuguese period strongly influenced Goan culture, food, language, and religion. It was a long dark period of conquest, war, and strife for Goa but also trade, and.. well, really trade was the only ‘good’ thing about Portuguese colonization. It was apparently the Portuguese who brought chilis to India.. can you imagine Indian food without chili peppers?

So, anyway, if you find yourself in North Goa, make sure to hit these three churches. It’s always a good time to go to church (right?) — especially after a long night of drinking in Anjuna or laying on the beach in Vagator.

Disclaimer: I’m not a religious person at all, I just love the architecture. It’s so hot in Goa that even in January I found myself seeking refuge in churches, knowing they couldn’t refuse me– and they’re all free to enter!

Our Lady of the Immaculate Conception

Right in the heart of Panjim, this church can’t be missed. Its switchback staircases are iconic. You’ll surely break a sweat just trying to reach the door! For hundreds of years, Portuguese sailors would land in Panjim after months at sea, and the first thing they would do was pray here.. if they made it alive.

The church has actually been rebuilt and expanded several times since its initial construction in 1541.

Tip: Be sure to come back at night, when the church is lit up spectacularly.

It’s one of the best things to do in Goa, they said.. So I figured why not, I’ll check it out.

This basilica was built in the 1590s in the finest Baroque style and is a UNESCO World Heritage site. It was constructed with laterite stone bricks which give it a unique glossy red color.

Inside it, you’ll find easily a 1000 tourists, both international and domestic, pushing and shoving to see the tomb of St. Francis Xavier, one of the co-founders of Jesuit-ism. Honestly, I found the inside of this basilica to be rather lacking in detail; gilded but nothing particularly interesting. The hordes of people did not positively contribute to the experience either.

Sadly, Bom Jesus has become super commercialized; as you walk through, there are people selling all kinds of junk and there is even a ‘sound and light show’ (of what??).

If there is a God, he is facepalming.

Tip: Check out the church across the street, St. Francs of Assisi, before heading back to Panjim. Bom Jesus isn’t the only thing worth seeing in Old Goa!

The Museum of Christian Art (MoCA) houses contemporary Indian Christian works, some of which challenge European Christian art and seek to retell the stories from the Bible ‘as if Christianity had remained in Asia’.

Roughly 25% of Goans identify as Christian, most of which are Roman Catholic.

Ruins of Saint Augustine/ Church of Our Lady of Grace

Built in 1600, St. Augustine was the first church in India. It was a colossal structure, with four towers, eight chapels, four altars, and a convent, and considered one of the finest Augustinian churches in its time.

Sadly, this church is hardly recognizable today, having been abandoned over 150 years ago. The massive bell, however, was salvaged and can be seen in Our Lady of the Immaculate Conception. If you happen to be in Old Goa already, it’s worth stopping by. Otherwise, don’t worry about, nothing really to see here.

This underrated church is next to the Se Cathedral in Old Goa, and across the park from Bom Jesus. After visiting the crowded Bom Jesus, you’ll be calmed by the serenity of St. Francis. Personally, I found the church much more interesting, as it is intricately carved and decorated with painted tiles bearing Portuguese floral patterns.

It was built in the 1660s, and unfortunately, the frescoes have not been completely preserved, but the parts which have been are incredible: yellow, black and gold scenes of St. Francis of Assisi’s life in Italy. The pink laterite stones really shimmer when the sun comes through the skylight.

Honestly, I found all of the Goan churches to be slightly different than churches I’ve seen before. They bear contemporary colonial influences, brighter and more adventurous designs.

I was really impressed by this church, and was happy to find some peace and quiet!

Suprise! This isn’t a church, its a Hindu Temple. But, notice the style– it has pretty clear Portuguese influence. This temple is halfway between Panjim and Margao, just a little bit past Old Goa. So, if you aren’t tired of religious buildings after Bom Jesus, St. Augustine, and St. Francis, stop by before returning to Panjim! 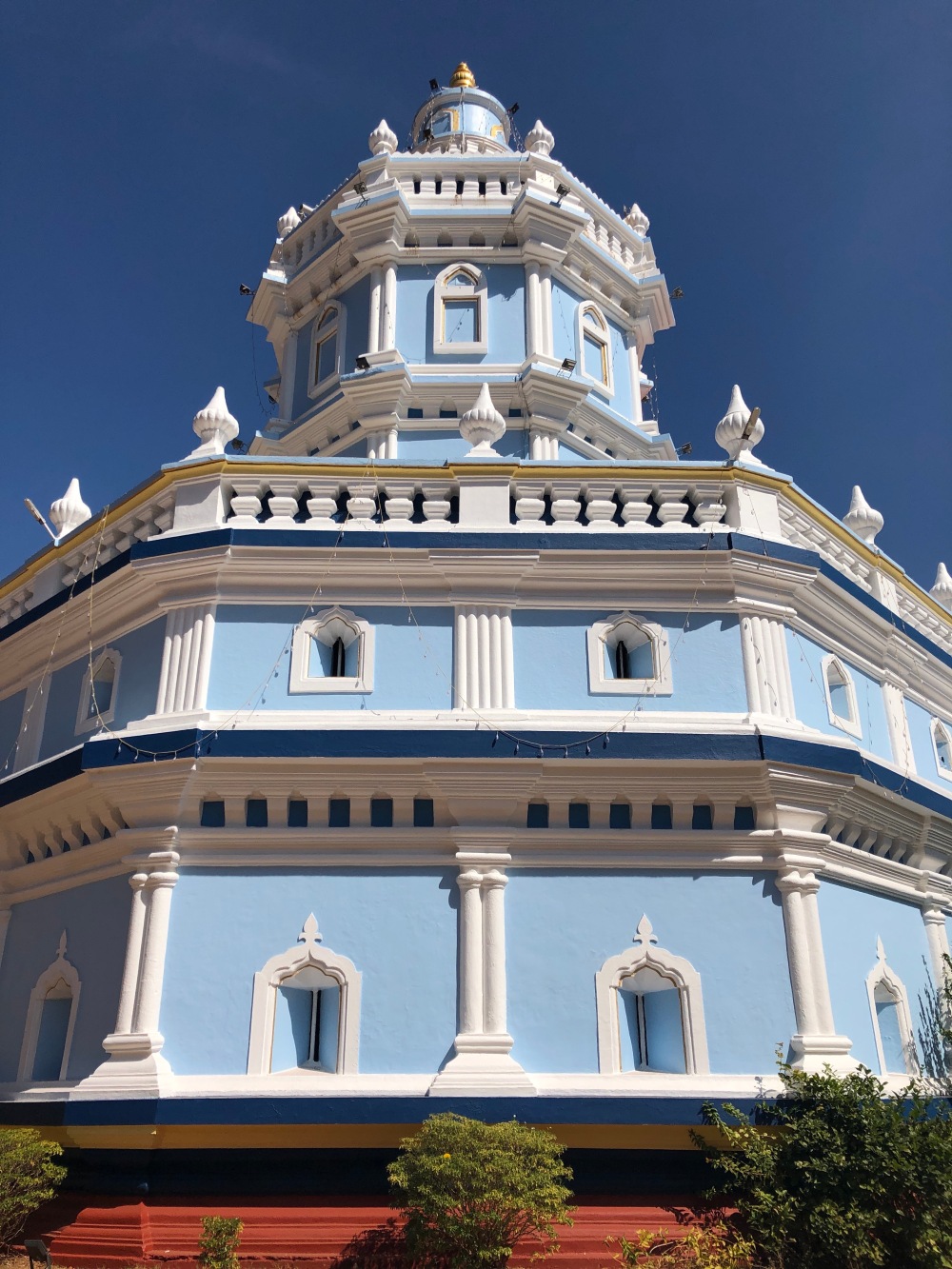 This temple isn’t an ancient UNESCO site, but still worth visiting if you haven’t visited an active temple before. The priests will give you holy water, teach you some mantras, and if you make a donation, bless you in various ways. I brought an offering, some flowers that were being sold outside, and was very happily received. It was a great experience!

After casually visiting all of these churches in Old Goa and Panjim, I realized I’d probably appreciate visiting Portugal more now that I can finally appreciate Christian art and architecture! For the longest time, I was so bored by churches, but now when I visit a new city the first thing I do is run to the main church, mosque or temple.

Portuguese colonialism in Goa was terrible in many many ways. However, these monuments still bear cultural value and historical significance from which we can learn. I strongly encourage reading about Goa’s history in “Souls, Spices and Sex” by Loudino Alberto Rodrigues and understanding the effects of colonialism on the region before taking tasteless selfies in front of the churches.

Now go out and explore!