Puerto Rico has a rich culinary scene, due to its Spanish, Taino and Afro-Carribean heritage. I spent a couple of days in San Juan eating everything I could get my hands on.

Everything is Fried and Stuffed

In Puerto Rico, you’ll find just about every plant imaginable can be fried in a ball; yucca, pumpkin, plantains, sweet potatoes, etc.

That means that everything is GOOD.

Tostones are salty and savory plantains while Amarillos are sweet plantains, both of which you’ll find all over Latin America.

Lots of things are also stuffed (and then fried); plantains stuffed with beans, yucca stuffed with cheese, bread stuffed with or veggies.. the list goes on. You’ll also find empanadas and other familiar stuffed Latin specialties here.

Pumpkin bellies, or barriguitas are really delicious, and something I hadn’t seen before though. Even if you don’t like pumpkin I’d recommend them. Barriguitas don’t taste anything like pumpkin pie or a pumpkin spice lattes.

They have a sort of savory taste but a soft texture. They aren’t as common so if you them on a menu, don’t pass them up! 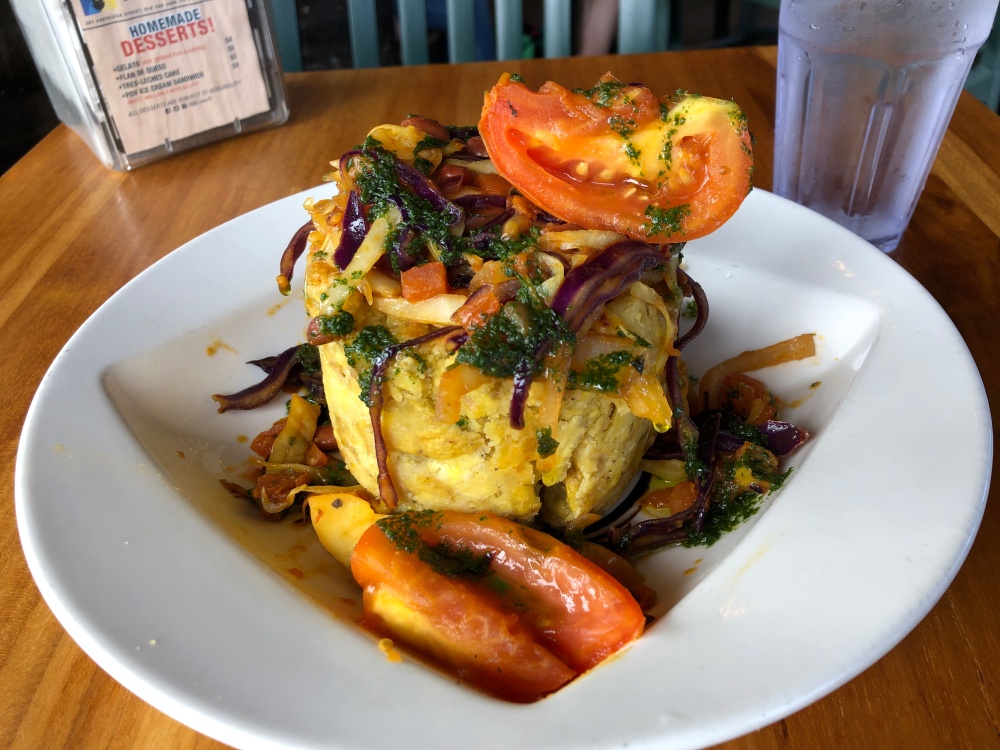 If you haven’t had enough mofongo, you can try TRIFONGO, which also has amarillos (sweet plantains) stuffed inside IT.

Latin countries are known for their staples of rice and beans, but in each country or region, they are prepared slightly differently.

Habichuelas are red beans, stewed with as well as onions and chilies, and served over rice. If you’re lucky, the soup will have a few pieces of sweet potato in it too. Now you’re eating like a local.

Wandering around Old San Juan, you’ll see lots of little shops selling hot sauces, jams and other condiments. Stop in– you don’t have to buy anything to try dozens of samples. From spicy guava picante to savory banana ketchup and mango honey butter, these shops will keep your taste buds guessing.

I stopped in so many shops and ate so many samples walking down Fortaleza street, I didn’t even need to stop for lunch. Highly recommend it.

These condiments are great on Puerto Rican plantain chips, mofongo, etc. but also are great additions to your homemade concoctions. Add any of these tangy tropical sauces to your leftovers at home and if you close your eyes, its almost like you’re back in San Juan and not preparing for midterms.. almost…

This Puerto Rican holiday drink is made of coconut, spices and rum, and makes for a great digestif. It’s sort of like a spiked vegan eggnog with a Carribean kick to it, and you’ll find that different places make it differently, so there’s an incentive to drink Coquito all over town.

Coquito means ‘little coqui’, a coqui is a small frog you’ll hear all over Puerto Rico at night. Why is it called a coqui? It’ll make sense once you get to Puerto Rico!

Puerto Rico has two famous beers that can be found at any restaurant or bar; Medalla, a light beer, and Magna, a premium lager. These cervezas are more similar, in my opinion to American beers than to Mexican or Cuban brews, but regardless are extremely refreshing after a long day walking around old San Juan. Vacation is hard work!

Bacardi was founded in Santiago de Cuba, but now is headquarted in Cataño, across the water from old San Juan. You can read about visiting the Bacardi distillery here: San Juan’s Hottest Nightlife

Don Q is a Puerto Rican rum from Ponce, and sort of the underdog; Bacardi always steals the limelight but Don Q is really good and harder to find outside of Puerto Rico. Bottles are much less expensive too, making it a good duty-free “gift for a friend”.

Cocktail: The Piña Colada was invented in Puerto Rico in the 1960s at a restaurant called Barrachina. The restaurant is still there, but they don’t made their piña coladas by hand, they come out of a machine and still cost $8, so I’d recommend going elsewhere.

Kola champagne is a classic Puerto Rican soda worth trying, especially if you’re not much of a drinker. It kind of tastes like vanilla coke, but there’s a hint of something else I can’t quite put my finger on..

You’ll find vendors selling homemade ice cream out of their carts for $2-5 dollars depending on what part of town you’re in. My advice is, try a fruit you’ve never heard of. You’ll be happy you did. My favorite was guanabana, or soursop, creamy and subtle, in a milky way similar to coconut but tasted like.. well.. guanabana.

Similarly, people are selling authentic shaved ice near some of the touristy sites. They’ve got a huge block of ice, and if you want a cone they’ll scrape their scooper the traditional way– no machines. How the ice doesn’t melt immediately in this heat, I’ll never know. Tamarind flavor is great if you like sour things, anise if you like bitter tastes, and sesame seed if you want to really confuse your tongue.

For a few reasons, food prices are a lot higher than you’d expect in Puerto Rico. San Juan is definitely not an inexpensive place to eat for a student. However, there are lots of options for vegetarians/vegans which is a plus.

Prices are similar to prices in New York; at a pretty casual restaurant, it’s not uncommon to spend $20-30+ on an entree and a drink.

Overall, despite the high prices, I was happy with all the new things I tried in Puerto Rico. There are still plenty of dishes and tropical ice cream flavors I didn’t get to try.

I’d definitely go back, just to eat some more amarillos!