This isn’t a guide to Vang Vieng, this is just a little bit about my experience there.

I’ll be honest, at first, I had no intention of staying in Vang Vieng for more than a day. If it weren’t located exactly halfway in between Luang Prabang and Vientiane, I would’ve skipped it completely. But after 6 hours on a sleeper bus next to an unusually large Lao man, I was happy to stop in the town for the night. Yes, the sleeper bunks are for two people. Bring a buddy.. or get ready to make a new friend.

It was pouring rain when I arrived and I was immediately soaked. I had nowhere to stay so I quickly found one of the most popular hostels online– it was terrible, but it was a place to crash. ‘It’ll just be one or two nights’, I reassured myself. The pool was full of couples doing questionable things, the water was a murky and warm.. yuck.

Vang Vieng used to be one of the hottest party spots in Asia in the 1990s and early 2000s, which is one of the reasons why I didn’t intend to stay long– the backpacker party vibe is not really my scene. But, you can’t visit Laos without tubing down the ‘lazy river’, the wide, brown Mekong which flows all the way through Laos, Cambodia and out through Vietnam.

When I woke up accidentally at noon, I was worried I wouldn’t be able to find a tubing tour– fret not, they leave everyday, all the time. 20 of us hopped in the back of a truck with some tubes with an disconcerting amount of duct tape on them, and headed down to the riverbanks.

The first mistake I made was not pre-gaming it.

Essentially, you tube for 20-30 minutes to one ‘bar’ with overpriced (by Lao standards) drinks, then tube again to get to another bar. It’s over by 5pm or so.

We were so sober that, even drinking as much as we could at the first bar, the alcohol didn’t hit us until we were almost done tubing, near the second bar. But, by that point it was kicking in for everyone and we passed the bar completely!

They threw the rope out to us, and a small Canadian woman caught the rope.. but no one caught her, so our pod of 6 or so guys drifted down the river until we were rescued by a slightly-peeved Lao teen on a speedboat. Oops.

The second bar was a mud pit and everyone got filthy, literally and figuratively — some people were suddenly naked, it was a freak show. I never thought I’d actually see someone doing ‘the helicopter dance’.

I just wanted to keep tubing. It felt like the party was just finally getting good but that was the end, they close everything before it gets dark.

We all headed back, wet and muddy, a lot of people bleeding. We exchanged information and agreed to meet up at the Jungle Party that night. It was 6pm, I passed out as soon as I hit the bed, woke up at 2am and decided to go to the Jungle Party.

I showed up to this Jungle Party looking good, in a crisp white shirt with only a few pad-thai stains on it — looking good by backpacker standards at least. Walking in, it was a beautiful venue, tons of trees, cool wicker swings and tables made out of stumps, psychedelic lights, and a tiki-bar.

As I got closer.. it was the weirdest techno music I have ever heard, there were only a dozen or so people there, all of whom where furiously inhaling helium out of balloons, or worse, straight from the little tin containers. It was like Khao San Rd 2.0, but worse because I couldn’t just go to the next bar– this was the main event.

I was expecting Laos to have good parties… in the middle of the low season. Never assume.

I was about to leave when I noticed my tubing buddies, some people from the U.S., Canada and Spain. It ended up being a really good time until we were leaving, some idiot German physically assaulted a Lao girl, then defended himself, saying something about ‘that’s how things are done here’. A pretty admirable American guy pushed him out of the truck — yes, it  was moving —  they fell out of the back together and before I knew it, it was an all-out brawl.

I was in my crisp white shirt though, remember, so I wasn’t about to jump in the mud and fight this mob of drunken Bavarians, that’s not really my style. A few of us snuck out the back while the chaos ensued, we didn’t want to get tangled up in any trouble.

The American guy, even though he was doing what was right, got jumped pretty badly.. and the truck had left him unconscious in the street. We saw him hours later with a big swollen eye.. He was lucky to be alive.

Don’t pick fights in Laos.. if you die, no one is going to try to find you.

The friends I made were pretty cool, so I decided to stay one more day, again. It was nice to get a break from all the seriousness of temples and museums.

When we all awake, probably noon or so, we headed to the Blue Lagoon in a shared tuk-tuk we hired for the day for $10-15(?). The hour-long ride was so bumpy we were literally airborne multiple times, banging our heads around in the back of that metal death-trap.

Be prepared for some difficult terrain.

There are like 6 of these lagoons things, I’m not really sure which one it was, maybe #3 but it wasn’t the original. The original one is crowded full of Koreans with professional video equipment filming, so if you want to jump off the high dive.. you may have a global audience on the internet.

It’s a freezing cold deep-blue natural pool, so go on a hot day, and you’ll probably still be cold. It’s also really deep and freshwater…meaning you won’t float. I realized in this moment I’m not as strong a swimming as I thought.

Since there are so many Koreans, they serve Korean food too, which was cool because honestly Lao food doesn’t really do it for me. At this point in my trip I was already missing Thailand.

After our frigid swim, we decided to hike up to one of the famous viewpoints in Vang Vieng, Nam Xay (pronounced like ‘Psy’) The town, while sort of ugly itself, is surrounded by beautiful green karst mountains. 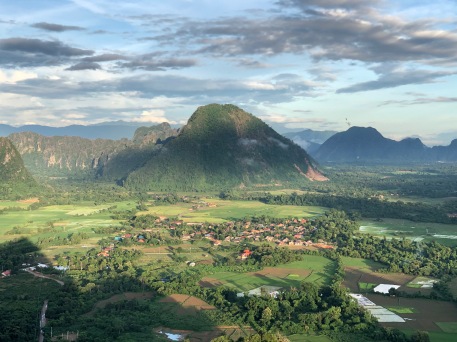 The hike itself wasn’t bad, maybe an hour and a half up. But then it had rained a little bit, and we stayed at the top a little too long getting photos and taking in the views. Sunsets on mountaintops are pretty, but we forgot about having to climb back down.

It was probably my fault. But c’mon, are these pictures awesome or what? 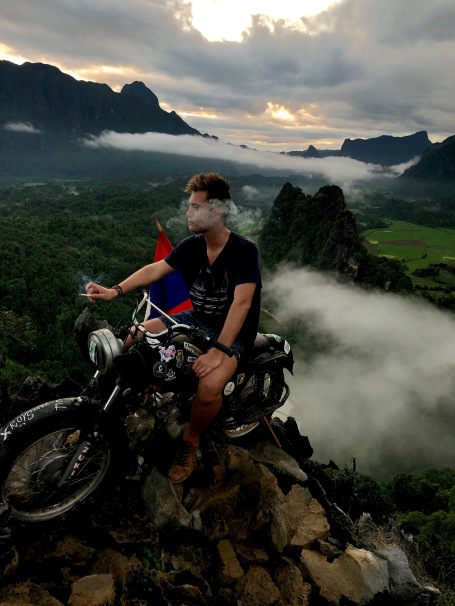 It was pitch black on our way down, the girls were just screaming the entire time. We all slid down on our butts and emerged from the foliage completely brown. I thought it was worth it, the group did not. Sorry guys.

We probably should’ve done the hiking first, then once we were all sweaty in muddy, hopped in the Blue Lagoon. Oh well.

Hike in the morning.. and not in the wet season.

One of the best things to do in Vang Vieng is kayak on the river; everyone does the tubing and then most decide they’ve seen enough of the river.

While there are tons of kayaking excursions, if you book one of those you’ll be with a dozen other people during the day. A friend and I simply walked down to the riverbank around 5pm one day.. at this point I’d forgotten how many days I’d been there..

Confused? That’s just how things are done here.. If you want a deal, Everybody knows somebody who can help you. Be patient, it’s worth it.

Our guide was a cool local student, very smiley, and took us to some cool local bars along the river. He was studying hospitality and working as a local guide. Seems like a pretty good job at 18– spending all summer kayaking and drinking with tourists!

What was so neat about this tour is that he took us upstream, so that, instead of starting in VV and going down, then taking a bus back, we drove up and then kayaked back to town. So, we saw the ruins of old Vang Vieng, back in the day when there used to be ten or so bars along the river, on both sides, as well as ziplines, rope swings and all kinds of very fun and very dangerous things across the river.

Sadly, too many people died, so it all got shut down. It was eerie to see something so cool wasting way, like an abandoned amusement park, with crumbling buildings, some still brightly painted, rope swings still intact. It’s probably for the best though.

The sunset was a deep violet and bright orange glow swirling on the horizon, filling in the gaps between the mountains. We sipped on ice cold Beerlao and let the current take us. The river ushered us along until we saw the twinkling lights of Vang Vieng. There we dismounted and thanked our guide! The night was only beginning.

Vang Vieng is surrounded by stunning landscapes, so make sure to get out and experience the nature, intimately if possible, on a private or small-group tour.

There a tons of things to do in Vang Vieng, things I’d never even heard of, like ‘abseiling’, when you rappel down a waterfall. Seemed cool, but after 4 (or 5?) days it was time for me to move on, to Vientiane and southern Laos.

I hope this little story helps you survive Vang Vieng.

All in all, I think tubing was the least exciting part of VV, but I made some great friends who I hung out with for days, so if you’re a solo-traveler I’d highly recommend it. I wouldn’t recommend hiking the trails or going out alone, it’s good to have company.

Oh and one more thing.. if someone offers you opium, don’t smoke it.

If you liked this post, you can read more about my time in Asia here: https://tristans-expeditions.blog/category/asia/