Thai food is (and I may be a little biased here) definitely one of the most flavorful and delicious cuisines in the world. But did you know it’s actually really simple to prepare?

I took a Vegan Thai cooking class at Morning Glory in Chiang Mai and it was one of the best culinary experiences of my trip. This isn’t going to give away ALL the secrets I learned, but hopefully just enough to convince you to take a class yourself!

I had booked a group lesson, but arrived to the restaurant at 10am to find it empty– lucky me! I would definitely recommend a private or couples lesson so you can get help. I’ve taken cooking class in a few different places and if the group is large you really don’t learn the specific techniques.

If you’re just looking to have fun, it doesn’t matter but I’m a terrible cook and was really trying to learn so I appreciated the half-day-long private lesson.

Before we entered the kitchen, Diana, the owner, a Thai women from the Isaan region, took me on a market tour. Picking out the right foods, unfortunately isn’t something you can just learn, you have to know. Papayas for papaya salad, for example, you want unripe — don’t make that rookie mistake. Smell seemed to be her guide, as she navigated the chaotic stalls, carefully choosing the best ingredients. 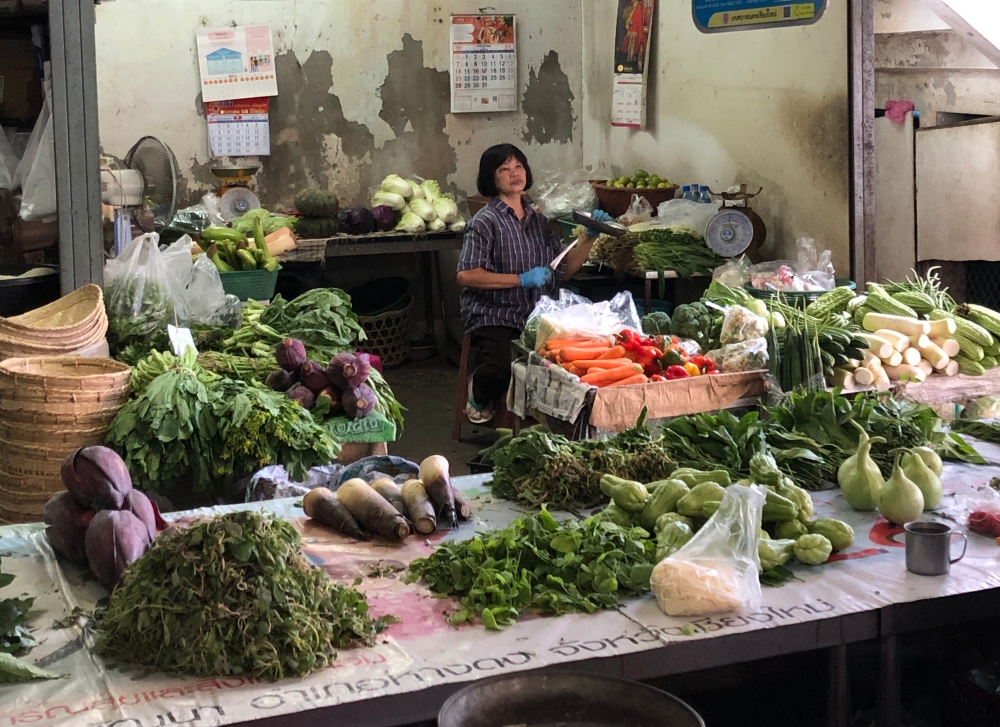 After picking out fresh pumpkin, coconuts, chili peppers, onions and other vegetables it was time to get cooking! A traditional Thai kitchen also only has 3 things; a mortar and pestle, a bamboo steamer, and a wok. That’s all you need.

Thai food, she explained, has four main flavors, the four S’s: Spicy, Salty, Sweet, and Sour. These four are present in almost every dish but must be carefully balanced by taste. The spiciness comes from chilis, the saltiness from soy sauce, the sweetness from sugar and the sourness from lime or tamarind.

First, we ground up our own chili pastes using red and green chilis, for different curries. Thai curries are more similar than they are different; most Thai curries are made of chilis, kaffir leaves, galangal, lemongrass, onion, garlic and salt, then mixed with coconut milk.

The only real difference: Green curry is green from the green chilis and ground kaffir leaves, while red curry is red from red chilis, and the kaffir leaves in it are not ground, but slivered and therefore do not alter the color.

So, with our curry pastes, we were able to make 4 dishes: Green Curry, Red Curry, Massaman Curry, and Khao Soi, which all seem completely different, but are essentially the same dish, just with different ratios.

(We could’ve made Panang too, it’s also made with the same red curry paste base.) 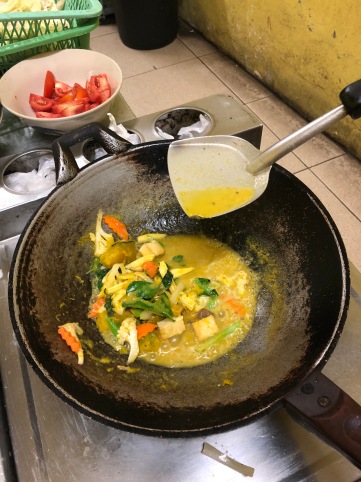 Green Curry is my favorite so I was excited, and traditionally in Thailand they make it with pumpkin which I’d never had before.

We also made fresh spring rolls; which seemed simple until I did it and realized how terrible I am at it! Fresh spring rolls are only different from fried spring rolls in two ways; they use rice noodles instead of wheat, and aren’t fried. 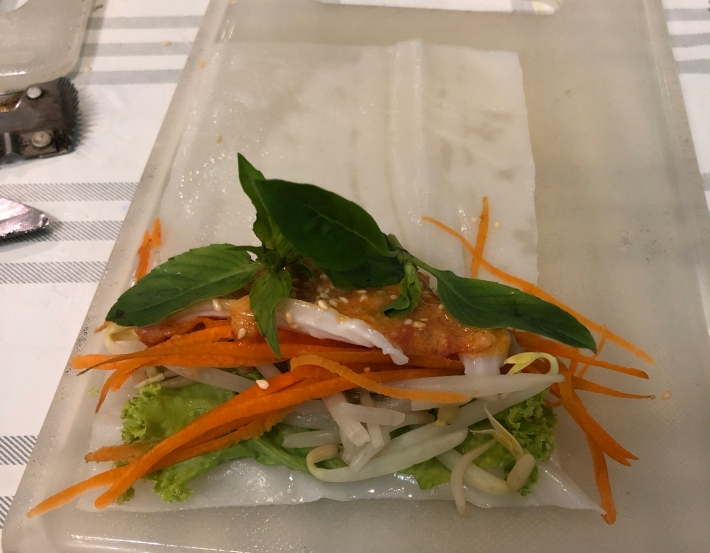 You just lay down a big flat noodle, stuff it and roll it up.. sounds easy right?

Anyway, pretty simple but it’s harder than it looks.

This one is pretty fun to make, since it involves the mortar and pestle. The shaved papaya is the salad base, the dressing is a spicy and salty juice made from smashing the tomato with soy sauce, lime and chilis. Add sugar to taste and top with peanuts, or if you want, crush them up too.

This was an acquired taste for me.. it’s difficult to find Papaya Salad without seafood in/on it, and the few times I was able to get it, I didn’t like it. But it grew on me, and now its something I actually crave, it’s hard to explain. It’s refreshing, yet makes you thirsty. Sweet but bitter, it evokes a lot of different senses. If you are feeling heavy from eating lots of curries and smoothies for days, it makes for a good light lunch or snack by beach.

An iconic Thai dessert, mango sticky rice can be found on every street corner in Chiang Mai and Bangkok. And now I know how to make it at home! Like everything else in this post.. it looks easy but texture and timing is everything. 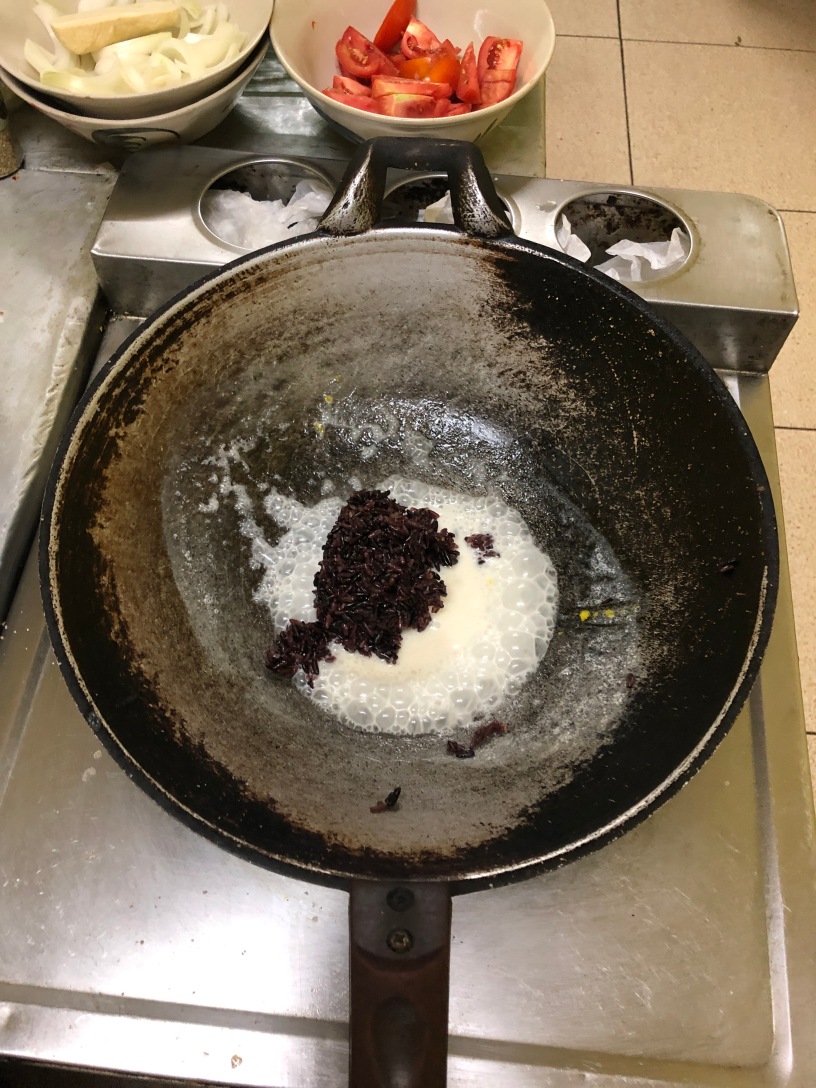 All you do is heat up the already-steamed sticky rice with coconut milk, then plate it with some fruit. We sprinkled some sesame seeds on top as well. 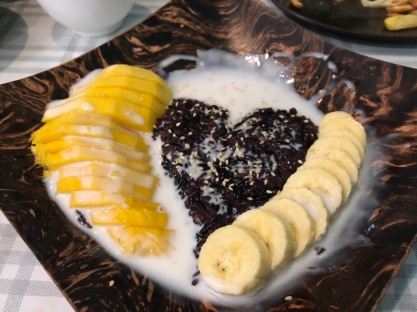 Perhaps the simplest dish, and I messed it up! I sort of spilled the milk but its nothing to cry about, the dish was just a little bit soggier, but still delicious. I was so full from a full-day of eating — I mean, cooking– I could barely finish it.

Don’t use ‘normal’ rice, it won’t be pretty if you do. Buy ‘glutinous rice’, and the best way to steam it is with the bamboo steamer pictured above, which you can find in Chinatown if you know where to look. Traditionally, all of these dishes are cooked with sticky rice, but other kinds of rice are cheaper and therefore have become more popular, especially in the U.S.

The best steamers according to Diana are from Laos, I picked one up for 25 cents in a small weaving village, but carrying it around for a month was hard.. ultimately I forgot it in a bus transfer in Phnom Penh during a storm. But, the knowledge I acquired in this class cannot be lost!

There are several vegan restaurants in the old town offering cooking classes, but Diana will teach you 10 or more dishes when other class will only teach 4 or 5. I hope this teased your tastebuds! If you find yourself in Chiang Mai I’d highly recommend taking a class at Morning Glory.