For some reason, I’ve lived in New York City for 3 years and never visited Canada. Two weeks ago, I decided to change that, and traveled up on a whim for the Quebec City Winter Carnaval.

A last-minute $100 overnight greyhound bus ticket took me from Penn Station to the border, then to Montreal, where I switched to a local bus. Roughly 9 hours later (total), I arrived in Quebec City. (If you’re not up for that, you could fly but it’ll cost you a pretty penny, around $350-550 round-trip which I found to be ridiculous.)

My first thought, seeing the snow-topped houses was “Why didn’t I come here sooner?”, something I continue to wonder.

Then I remembered, getting out of the bus, into -22°F (-30°C) weather, the coldest I have ever been in my life— that’s no exaggeration. Be prepared!

(This post is by no means a guide to Quebec City. This is just a little bit of what I observed, in hopes that it’ll inspire you to visit!)

Old Quebec City is really well-preserved, clean, and gorgeous, a testament to its former glory as French-Canada’s capital in the 1600s. The narrow pedestrian streets are lined with stone homes, outfitted with colorful shutters, lanterns and wreaths that contrast their rough grey facades. Hanging wooden signs and traditional shops only add to the historic feel of the city.

Life-size ice sculptures are scattered around town. I was happy to see some characters I recognized from my middle school French class days, for example:

One of the best things I did was take the ferry boat across the St. Lawrence River to Levis. There’s nothing in particular to do on the other side, but the views of the city from the boat are incredible, especially at dusk.

The old town is surround by walls and gates, a reminder of its war-filled history and divisions. In this photo its easy to see the higher-town and lower-town (the charming basse-ville), where citizens lived based on their occupation/status. Now it’s all prime real estate!

With so many lights, trees, and live music in the streets, it still feels like Christmas in February! I had no idea Canada could be such a romantic place. Quebec City completely exceeded my expectations.

Carnaval is a Catholic celebration leading up to Lent, which until recently I only thought was celebrated in Latin America. In Quebec City, the festivities last two weeks, culminating with a raucous parade of winter-themed floats around Valentine’s Day each year. And yes, in true Carnaval spirit, despite the weather, there are some (sort-of) scantily-clad dancers.

The ice palace, sculptures, giant slides, games and other events however, are open throughout the Carnaval season. The ice palace is really a sight to see, a one-story snow and ice structure you can enter, equipped with a full ice-bar and life-sized arcade-like games. (Check out my Quebec City highlight on Instagram to see the games and flashing lights! @tristans_expeditions)

Because of its shape, it’s sort of difficult to photograph, but you get the idea — it’s huge! The towers are 3 stories tall and impressive, built with bricks of ice, and at night, everything is lit up with neon lights.

The Carnaval isn’t free, you’ll need a 20 CAD ‘effigy’ pass to access the activity-areas, but its well worth it. The ice sculptures within the grounds are also clearly of a higher caliber, look at the detail!

There are also live bands performing all day and evening in a heated tent next to the palace, where you can warm up with a spiked coffee and listen to Canada’s next teen heartthrobs.

While this is in the main attraction, there are also many history and art museums to visit, as well as underground ruins of the old fort of, underneath the famous Chateau Frontenac.

Since it’s so cold, I spent a lot of time inside, drinking literal bowls of hot chocolate, but there were also lots of street vendors selling all kinds of typical Quebecois sweets. Quebec City has a lot of comfort food; hot, hearty, cheesy and starchy to keep you warm and full all day. I felt like I put on a couple pounds in just three days.

Beavertails, fried dough with cinnamon sugar are a delicious and gluttonous treat, especially if you opt for Nutella and/or bananas as well.

Fresh maple candy was probably the most interesting snack though. An Afro-Guatemalan immigrant was spinning syrup into chewy lollipops for just 2 CAD. It was cool to see how diverse a city can be, yet still hold true to its traditions. I found out the hard way that, this kind of maple candy, naturally, doesn’t hold its shape indoors! Eat it outside or prepare to be a sticky mess for the rest of the day. 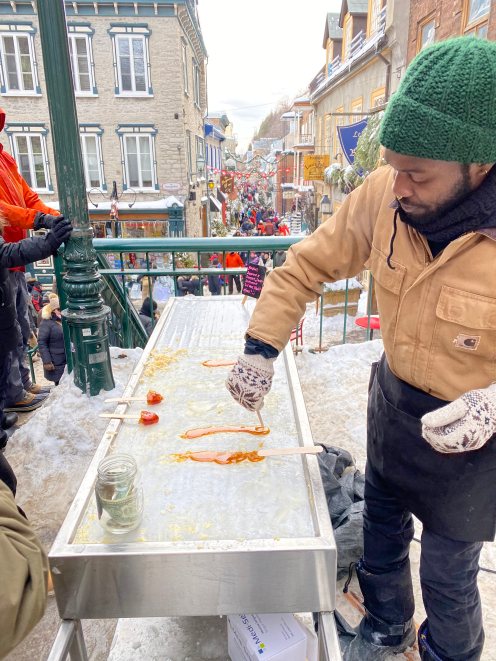 Poutine is a Canadian staple, typically French fries with cheddar cheese curds and meat-based gravy. At a 100-year-old diner I was able to find a slightly modified vegetarian breakfast poutine, which did not disappoint.

Since this is French-Canada, I indulged in some Bretagne galettes (savory crepes). Tasting these buckwheat pancakes was like sinking my teeth into pure nostalgia, remembering a weekend I spent with friends in Rennes and St. Malo nearly 5 years ago.

As far as specific restaurants, I don’t have any recommendations– I generally ate at the nearest places, meaning I generally paid extra for convenience. Meals were roughly 20 CAD, less if you leave the old town but the 20 minute walk will chill you to the bone. I was told Rideshare apps are banned because of taxi unions.. but you’ll be hard pressed to find cabs on the street. I recommend staying close to the old town, it’s pricier but will save you time and energy.

I was a little shocked at first, it broke my heart every time I saw a bear skin not to mention the sheer amount of Canada Goose jackets and fur hats for sale.. But remember, Canada was founded as a fur-trapping colony. Thankfully we live in an era where sustainable and cruelty-free options are becoming more and more available!

Quebec City is stunning, and there are so many things to do I saw only perhaps 1/2 of it, or less in the 3 days I was there. Walking to the bus stop to head back, I discovered more luxury shops and quaint cafes on the other side on town. Now I know for next time that there’s even more to explore.

I realize that these photos aren’t the best– it was so cold that even with two pairs of gloves on, I didn’t want to take my hands out of my pockets or stop walking for a moment to take a lot photos. It was also too windy to safely fly my drone.

Nonetheless, it was an incredible time! If you haven’t been to Canada before, I highly recommend Quebec City, since its culture is the furthest from the U.S. And no, don’t worry, plenty of people speak English. Some French would definitely help you get around though!

If you can make it to the Winter Carnival in Quebec City, you’re in for a thrill. Next winter, I hope to check out Winterlude in Ottawa!