Travelers tend to gloss over capital cities for some reason. Many assume that there’s nothing to see other than government buildings — and who wants to see those anyway?

Managua, however, is worth at least one day of your time in Nicaragua. There are plenty of fascinating museums, bustling markets, and unusual churches to keep you busy, which makes it a great introduction to this Central American gem.

Make sure to begin or end your day at the Mirador Tiscapa/Sandino Monument – the view over the city is gorgeous. The viewpoint overlooks the downtown area, lake Managua, and dozens of distant volcanoes.

Legend has it that the Nahuatl people settled this region thousands of years ago when they saw ‘two mountains in a sweet sea’, part of a prophecy given to them by Quetzalcoatl, the serpent god.

Managua is very green, and from above, looks quite small. However, if you venture out of the main downtown area you’ll find it’s densely populated.

Walking down the hill, towards the Malecon, there’s an outdoor museum, which explains the U.S. occupation of Nicaragua from 1912-1933, the ‘Banana Wars’, and subsequent dictatorship under the U.S.-backed Somoza family. You’ll want to have your Google Translate ready if your Spanish is rusty.

The Mirador is open til 10pm, so bring a few Toñas (the best Nicaraguan beer) and make an evening of it.

On the surface, Managua seems very modern, clean, and quiet. The real pulse of Managua though, is the market and surrounding barrios (neighborhoods). The Mercado Oriental is a one-stop shop for inexpensive clothing, bedding, and pretty much anything you can think of, as well as street food.

Walking from there towards my hostel, I discovered a mile-long market in the barrio. (Managua Backpackers Inn, which recommend, $10/night for a dorm, the place has a big pool and great crowd)

Out of respect, I didn’t take any pictures of the vendors, who eagerly invited me to sample their fruit.

Hundreds of people were shopping for their daily bread, dodging horses and carts as they pulled tons of mangoes along the dirt roads. There were vegetable stands on either side, as well as bars, pool-hauls, mini-casinos, and carnicerias (butchers). Loud music and shouting filled the air, as well as all kinds of smells (the good, the bad, and the ugly) — it was a true Nicaraguan experience. Never did I feel unwelcome or unsafe.

Tip: If you’re from the U.S. and would prefer like to avoid intense political conversations, it’s best to say you’re Canadian. Everyone loves Canadians.

The best place to learn about Nicaragua’s history, from prehistoric times until 1979 is at the Palacio Nacional de Cultura.

Housed in a colonial manor, the museum features dozens of exhibits, ranging from indigenous pottery to modern art. The plurality of Nicaragua’s national identity can be seen in its art and architecture, a blend of Spanish, Nahuatl, and Mayan styles with African and occasional American influences.

Some of the art is extremely political, which I found eye-opening. Most Americans are unaware of the long-lasting occupation and subsequent diplomatic frustrations between the U.S. and Nicaragua.

To understand the 1979 Nicaraguan revolution however, you’ll have visit the Museum of the Revolution in Leon. Or read this: From Sandino to Sandinista: Comparing Nicaraguan Revolutionary Movements

For more on Nicaragua’s Spanish colonial roots, visit the Casas de Sandino y Ruben Dario, two of Nicaragua’s national heroes. This waterfront museum is a replica of colonial Managua, which was all destroyed in the 1979 earthquake. Inside the homes are the belongings of Ruben Dario, Nicaragua’s prized poet, and Augusto C. Sandino who boldly led a militia to drive the U.S. Marines out of Nicaragua.

Managua, which means ‘next to water’ in the indigenous Nahuatl language, boasts a gorgeous lake-side walkway, or Malecón. 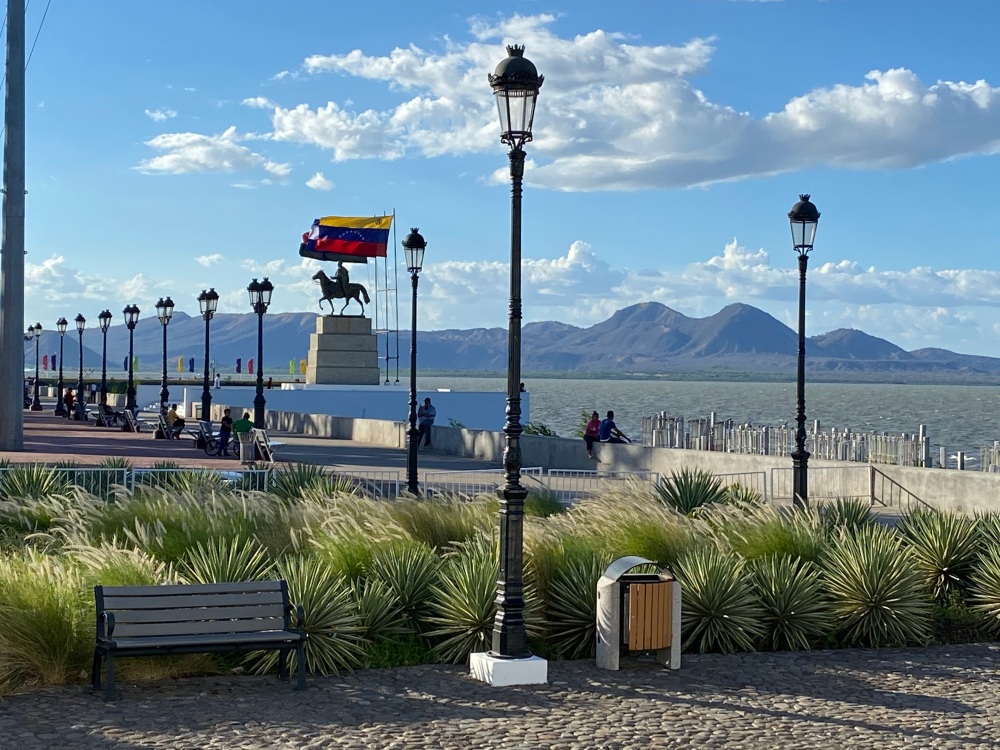 This area is a great place to hang out with locals, enjoy raspados (shaved ice) and take in the view. At night, the waterfront is beautifully lit.

Just past the Casa de Ruben Dario there’s a children’s waterpark, large skate-park, and even a small plane you can enter.

Notice the flag of Venezuela flying alongside the statue of Simon Bolivar— this to show Nicaragua’s solidarity with Venezuela and Cuba. The three socialist countries are proudly united against the unwelcome influence of the U.S. military in Latin America.

The main street of Managua is dedicated to Hugo Chavez, Venezuela’s late strongman leader, a friend of the imcumbent Nicaraguan comandante Daniel Ortega.

The swirling trees around Managua are ‘trees of life’, a government art project. I personally liked them but many Nicaraguans hate them– some even believe that the President’s wife is a witch and uses these ‘trees’ to cast mind-control spells!

Hate it or love it, Managua’s Metropolitan Cathedral of the Immaculate Conception is definitely a statement piece.

While this brutalist behemoth may be cold and hard on the outside, its interior dazzles worshippers and visitors alike. 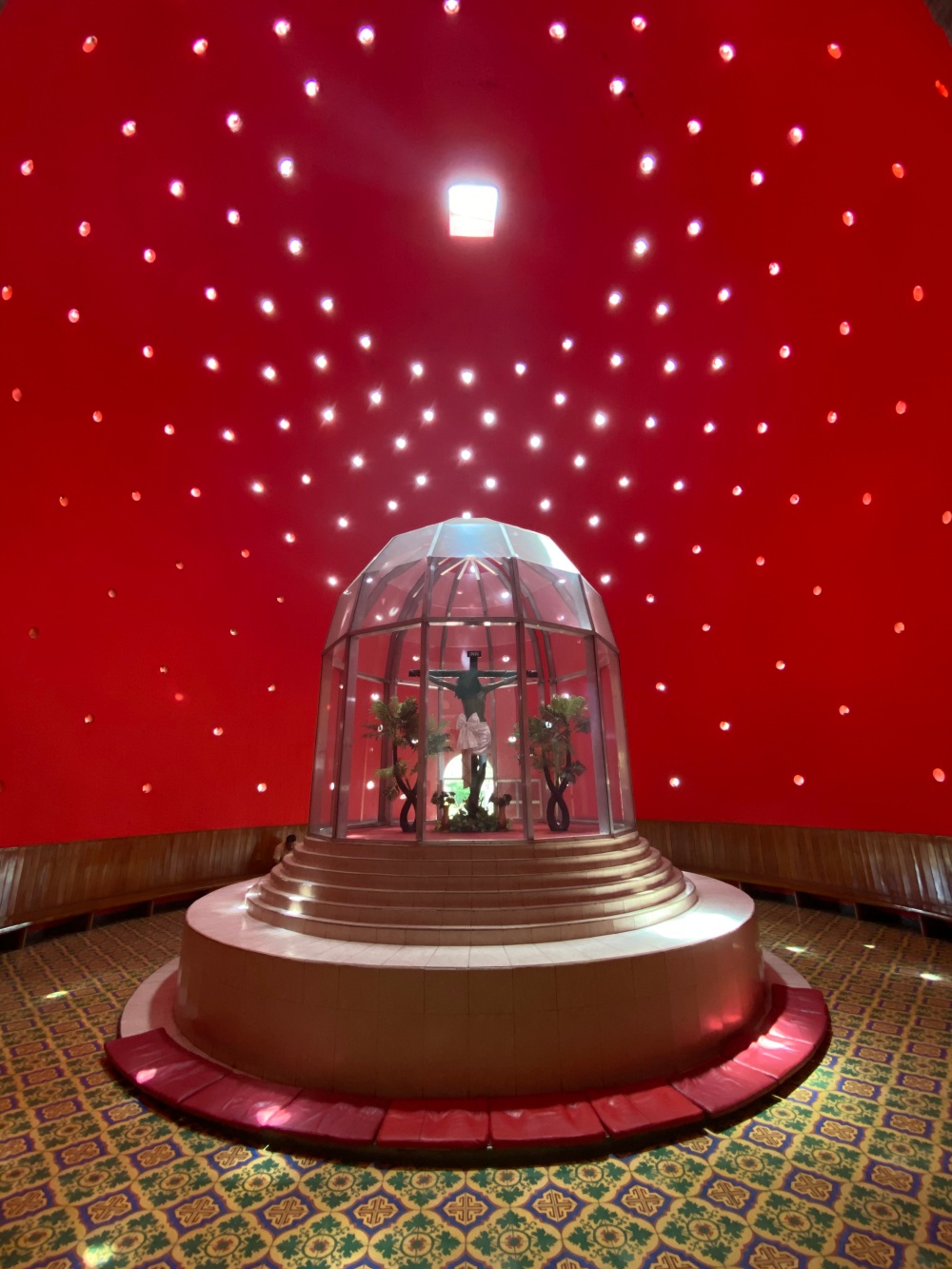 The eclectic mix of socialist-era architecture and colonial-style tiles is a perfect example of Nicaragua’s cultural hodge-podge.

Managua’s neoclassical ‘Catedral de Santiago’ stands (mostly) in one piece in the center of town, across from the Palace of Culture. Sadly, the 1979 earthquake damaged it to the point of condemnation and it is not open for tourism. Still, the park and square are open and often full of vendors and students.

The vast majority of Nicaraguans are somewhat if not very religious. Most are Catholic, however due to extensive U.S. missionary work, Evangelicalism and other forms of Protestantism are becoming more widespread. If you’re looking, you’ll constantly notice spot religious street art as well as religious phrases painted on buses and storefront signs. 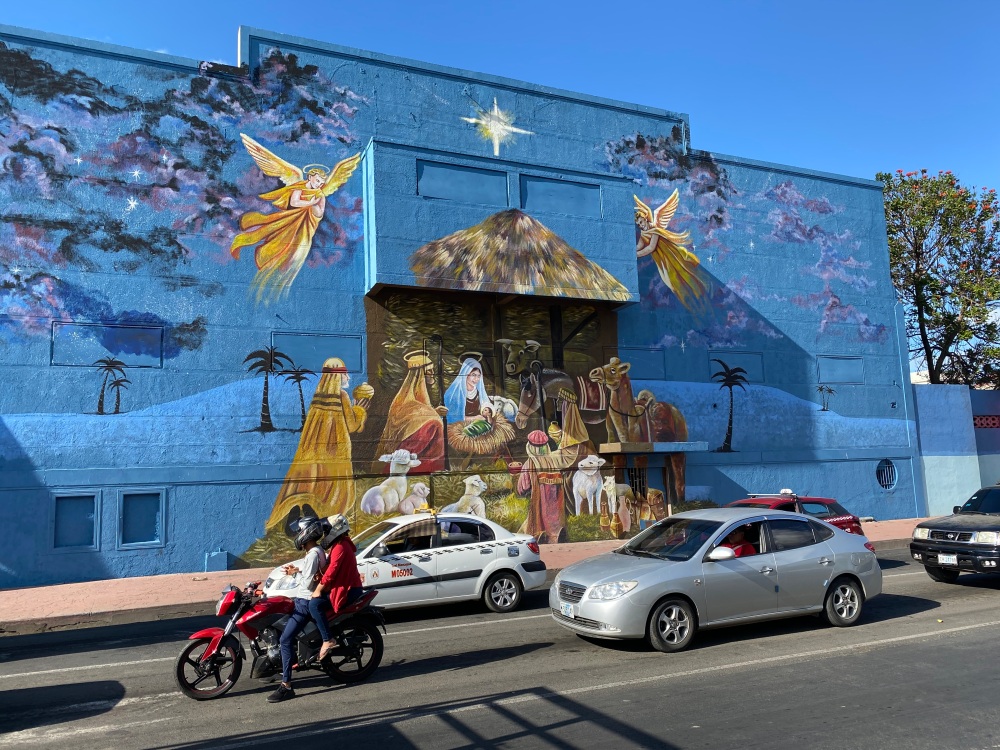 Most tourists I met in Nicaragua hadn’t spent a single day in Managua — and they missed out! If you take just one day to explore the country’s capital, you’ll be surprised how much you learn.

Managua is a great start to your Nicaragua trip, and should not be skipped. From kid-friendly parks to surreal art exhibits and cheap shopping, there’s something for everyone in Nicaragua’s capital.