The most common complaint I heard from travelers in Nicaragua was that they didn’t like the food. Many stuck to overpriced pizza, burritos, and sandwiches, though some of them had never even tried Nica food!

DON’T fall into this— You’ll not only blow through your money, but also be missing out on some the cleanest cheapest food in the Western hemisphere. Since I’ve returned to the U.S. I’ve been missing Nica food, from the markets overflowing with fresh fruit to the $2-3 asados (plates)

And NO, being a vegetarian is NOT difficult in Nicaragua.

While eating vegan is slightly more difficult, it is not impossible, just expensive. There are ‘proper’ and international restaurants in every major town, but if you’re traveling for months on end, chances are you won’t be able to afford  to $20/day on food. (If you can, power to you.)

If you’re spending an extended period of time in Nicaragua, as I was, you’ll likely cook some of your own meals. Don’t buy pasta from Pali (Walmart’s Nica branch) — buy local produce from the markets and whip up something delicious!

‘Gallo Pinto’ is Spanish for ‘Spotted Rooster’. This rice-and-beans combo is a staple of most Nica meals. 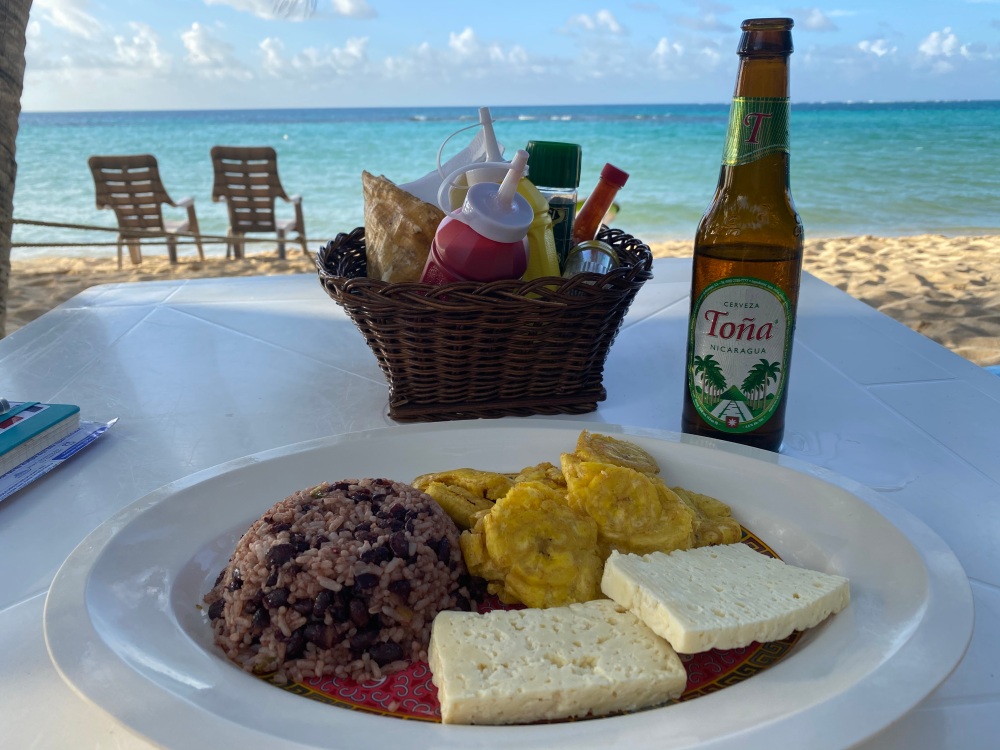 Gallo Pinto is the one constant– everything else on the ‘Desayuno Typico’ (Typical Breakfast), ironically, is different everywhere you go. On the Caribbean coast, it was often cheese (uncooked or lightly fried or boiled) and platanos (salty smashed and fried plantains). Inland, the cheese is often deep-fried or charred, and you’ll be offered the choice of scrambled eggs (huevos revueltos) or sunny-side up (enteros).

They can dress it up, or they can dress it down. It’s the plating that’s expensive– you can buy a typical breakfast for $1 on the street or $10 on the beach, and you’ll get pretty much some variation of this. 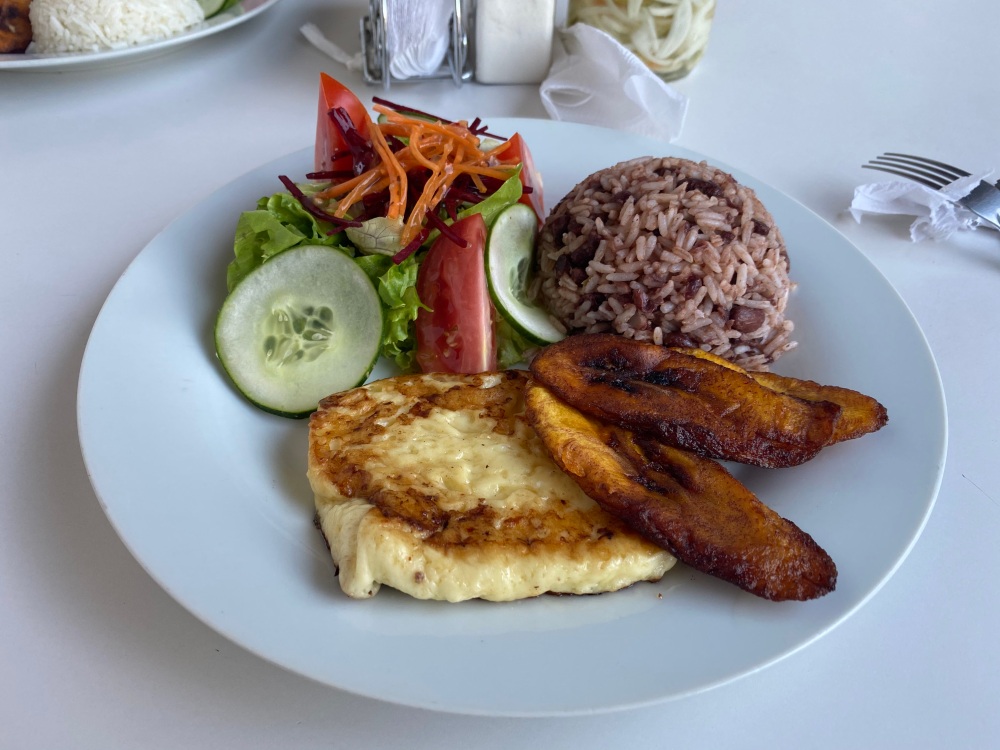 The BEST typical Nica breakfast, in my opinion, was in the Leon market. Runner-up is the little family-owned place in Ometepe across the street from Zopilote Hostel. Huge portions, delicious food, low price– both will only set you back 100 cordobas, roughly $3. 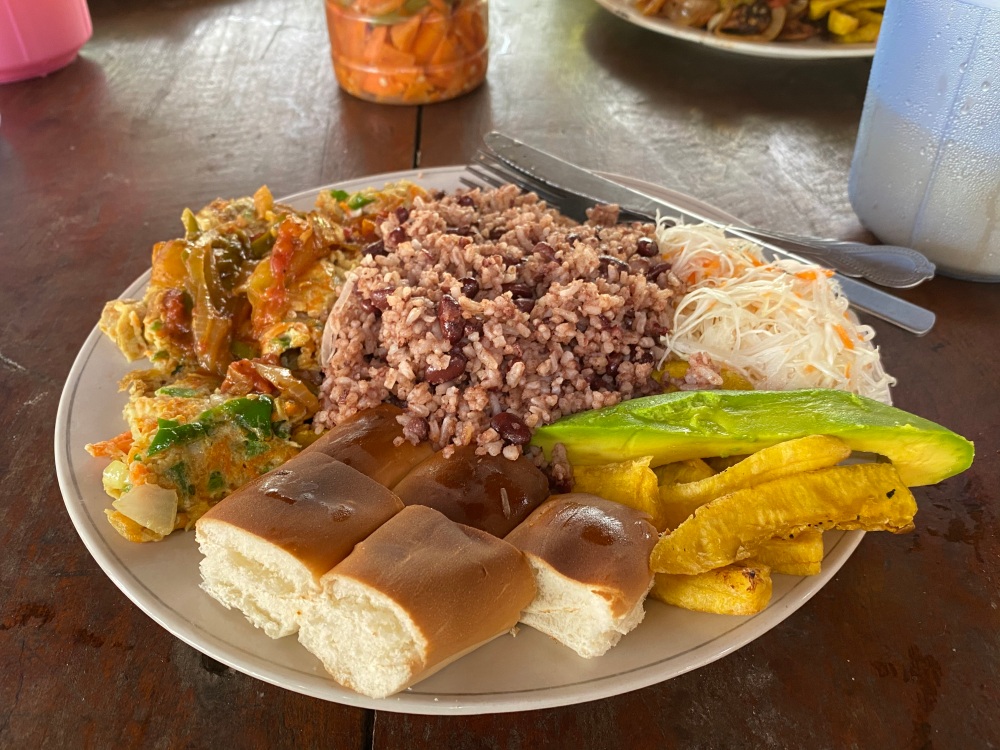 Just be sure to ask if the gallo pinto contains chicken stock— sometimes it does, however it’s often left out. If the Gallo Pinto does contain chicken stock, you’ll often be able to order beans and rice separately (arroz y frijoles), again, just make sure the beans or rice aren’t cook in stock.

The best part of Nica breakfast is that it’s usual served all day.

In the rare event that you wind up in a snooty part of town after 6pm and nowhere is serving Typico — you’ll likely have to get some variation of this:

I usually try to eat dinner early in Nicaragua in order to avoid the surge prices. A lot of Nicaraguan restaurants are meat-heavy for dinner, and this may be your only option. The best way to do it, in my opinion is to eat a big $3 typico at 11 am and some fruit or street food in the evening. This will keep you from overeating (because portions are massive) and overspending (because dinner prices are significantly marked up in many towns).

If you don’t have time or stomach capacity for a typico, there are many Nica ‘street’ dishes suitable for vegetarians. These corn-and-cheese based snacks are popular at open-air cafeterias, food trucks, and parks.

This is a fried quesillo (not to be confused with the other kind of quesillo, which is not nearly as good.) It’s a large corn tortilla with cheese on top, then folded and topped with cream. 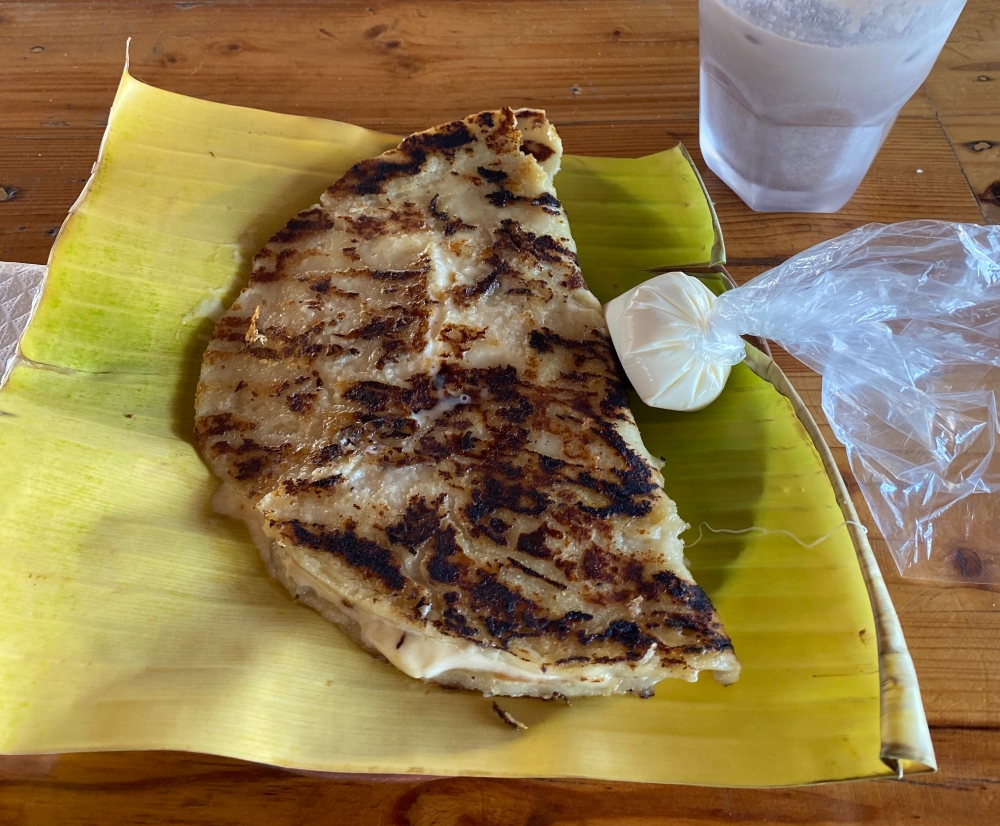 Below is a Corn tamale, wrapped in banana leaves are great snacks, but often a bit dry so make sure to pair it with a ‘Tiste’, a tradition drink made with corn, cacao, cinnamon cloves and sugar. 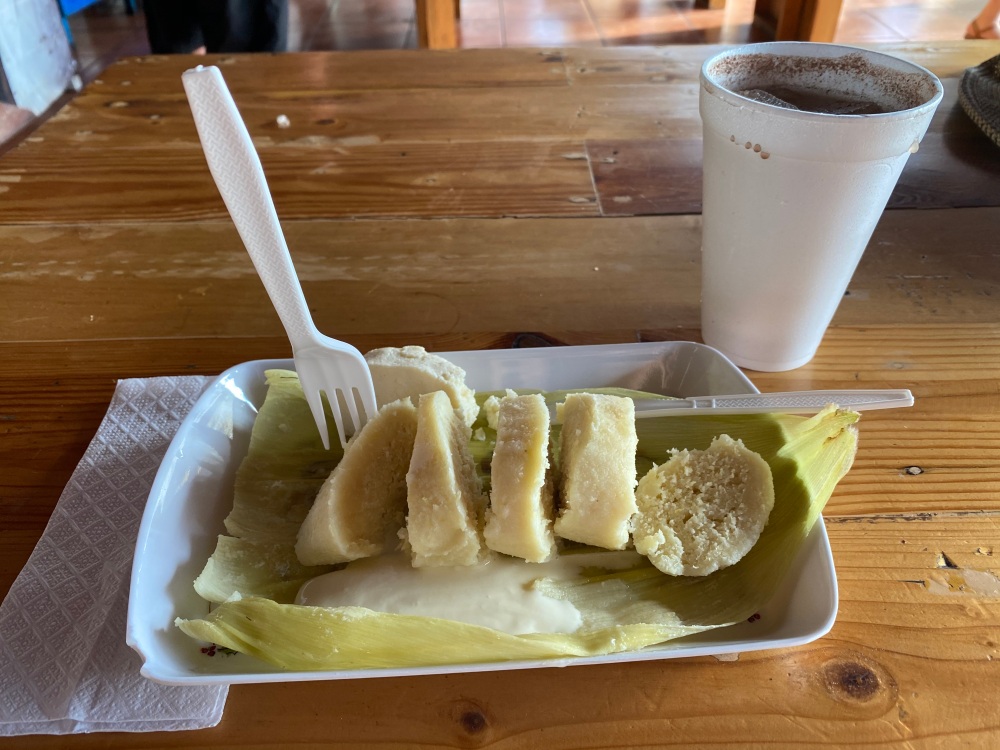 Nacatamales, a similar looking food from the outside, often contain pork, so be sure to ask what’s inside before you buy. 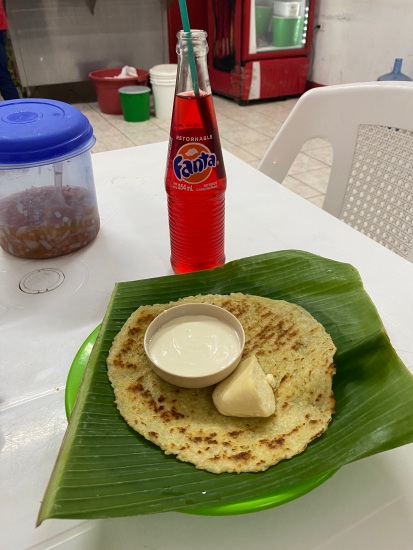 This is the other kind of Quesillo— which is completely different. The cheese, which is similar to white string cheese is braided, and topped with pickled onions, cream and chili oil. Quesillo is served open and cold in a soft corn or flour tortilla. You can find these just about anyway, and they are a popular bus-snack. Vendors will happily hop aboard to serve you one in a bag. 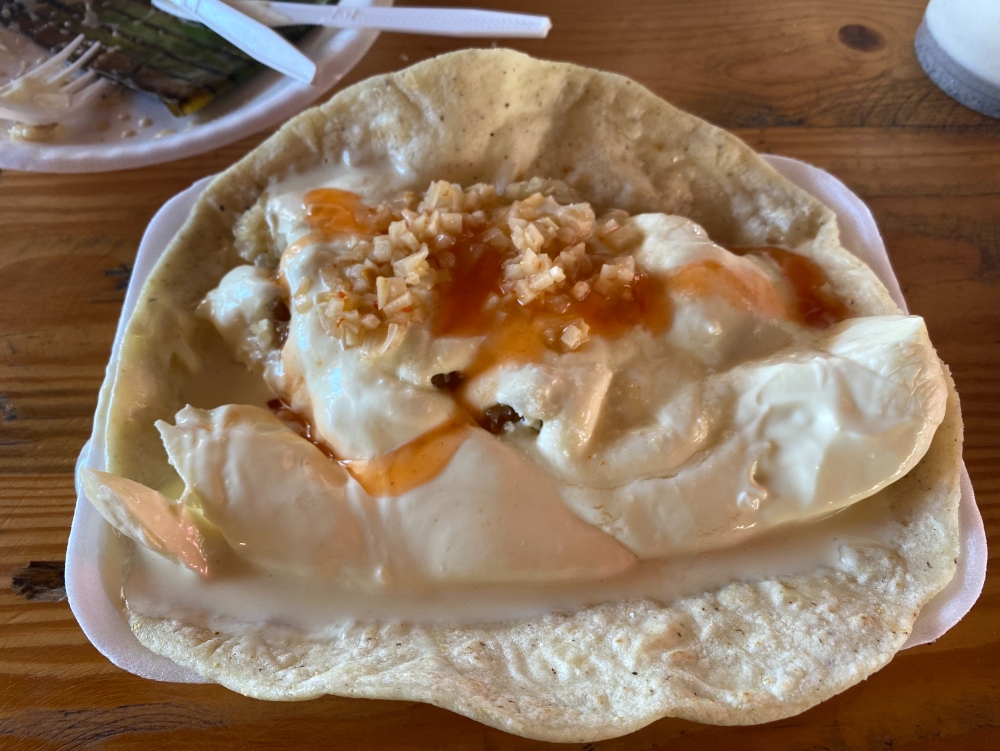 Repochetas are a great alternative to typico, and the closest thing to an entree salad I found in Nicaragua. The dish consists of two large corn tortillas with a layer of melted cheese between them, topped with shredded lettuce or cabbage, sour cream and chili sauce. 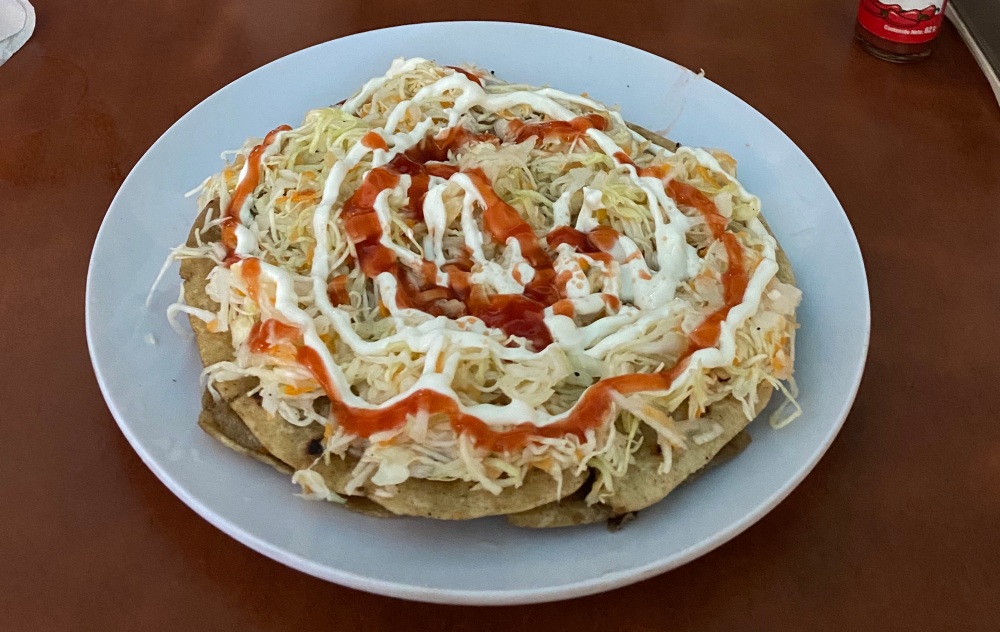 Yuca is a popular addition to many meaty dishes in Nicaragua, because of this, it’s often difficult to find vegetarian-friendly yuca. However, fried Yuca is popular in Leon, and comes topped with onions, jalapeños, and your choice of sauce. 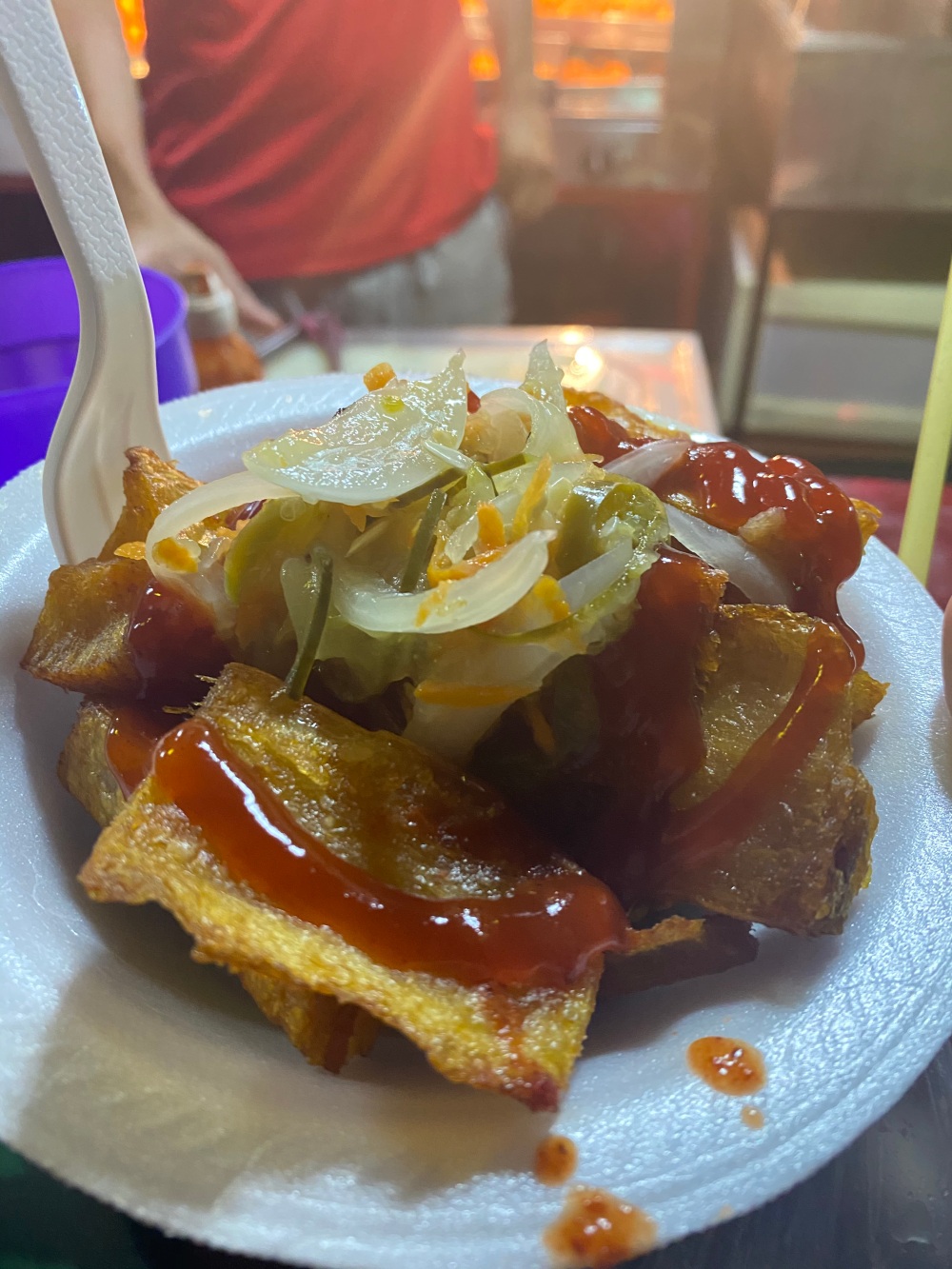 Many parks have nightly pop-up restaurants. Simply order at the counter, and people watch from a folding chair or park bench. Everything is deep-fried, just be sure to ask what kind of oil they’re using, and if things are fried together. Depending on the scale of the operation, cross-contamination may be inevitable. Chances are, where there’s one stall, there are several, and surely someone will be able to accommodate you. 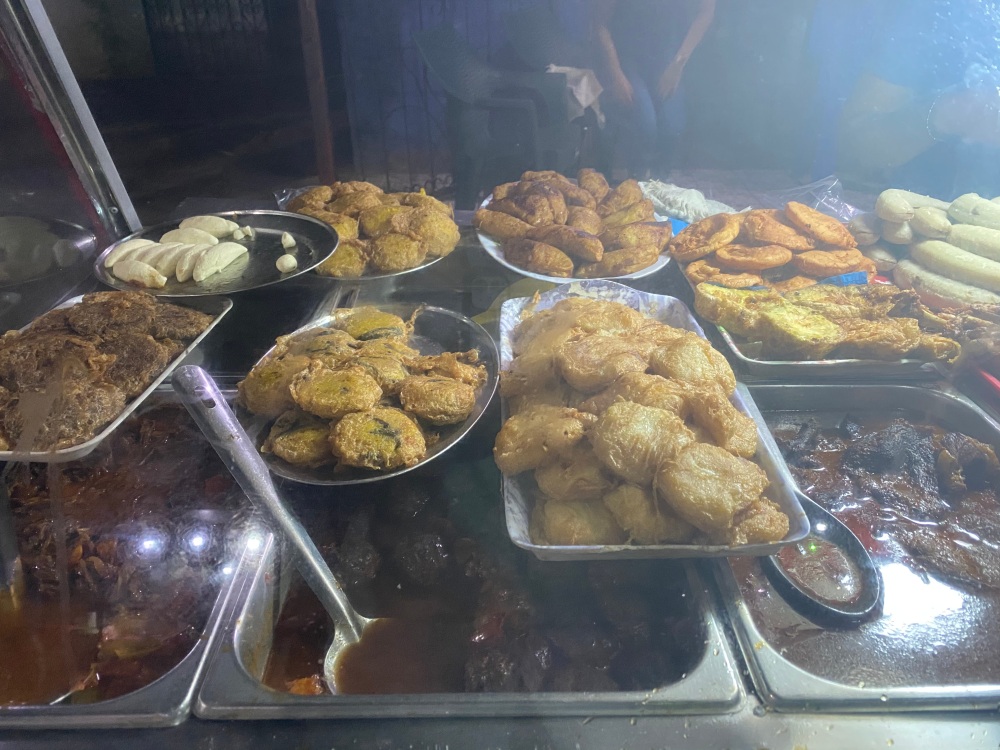 This last one is technically Salvadorian, but a Nica favorite: Pupusa. 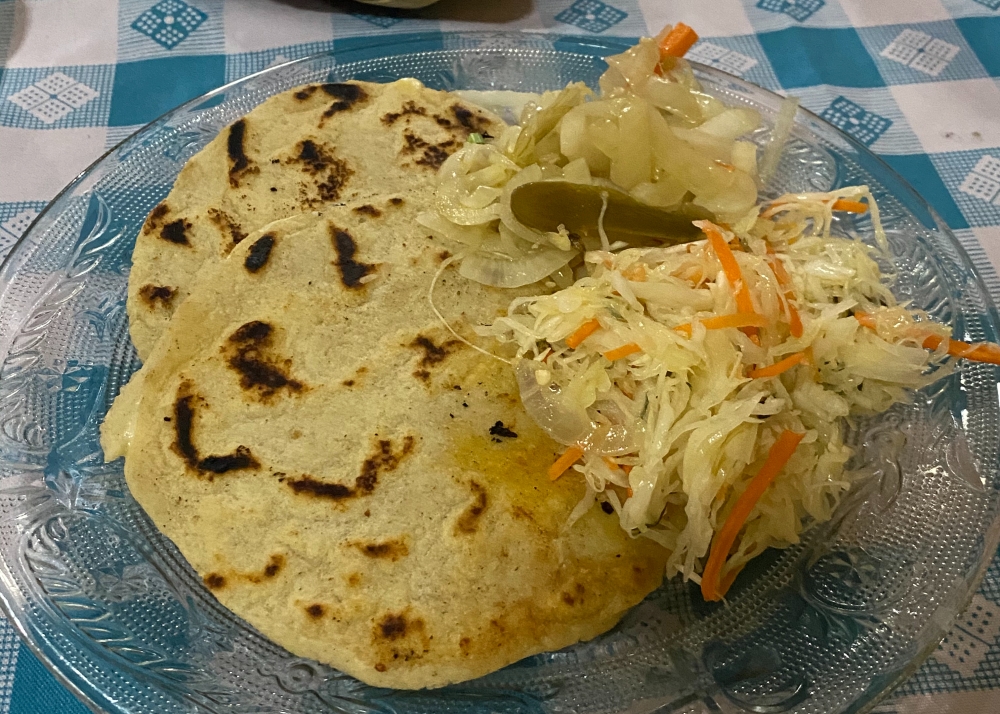 Pupusa, like fried Quesillo, is made from corn tortillas and cheese. But, and I know, you’re probably thinking (aren’t these all the same..?)

They are STUFFED with cheese. They’re only lightly fried, and served with Nica salad (ensalada repollo— slivered cabbage and carrots with banana vinegar dressing) and chilero (homemade pickled vegetables).

You can ask for chilero at any casual restaurant, and it will be different everywhere, so if you like it hot, you’re in luck.

One of my favorite things about Nicaragua is the drink-culture. Everywhere you go, there are vendors selling fresh juices, corn or rice-based beverages, and sodas in plastic bags with straws (bolsitas).

The most popular Nicaragua drinks are made from powders, which are then mixed with water and/or milk, sugar and ice. You can also buy the powders from the market and make them yourself.

Some of my favorites were:

To cool off, vendors also sell raspados, or shaved ice. Inside their carts are giant ice blocks which they shave with special tool, which I found amusing every time. Raspados is topped with copious amounts of caramel-sauce, berry-syrup and powdered milk. Be ready to stand your ground– wasps can smell it from a mile away!

Every town has a marketplace, with dozens, if not hundreds of vendors, selling everything from chia seeds to entire pigs (very sad). The more you buy, the better deal you’ll receive. Bring small deals and be ready to bargain!

If you like to cook, you’ll fall in love with Nicaragua’s affordable mega-produce — you can buy 20lb papayas, bananas by the bushel, and mangoes larger than your head for 1/10 of what they’d cost in the U.S. or Europe.

Pro-tip: buy nuts from the market and make your own nut-butters. Imported American Peanut Butter costs $7-10 in the grocery store. 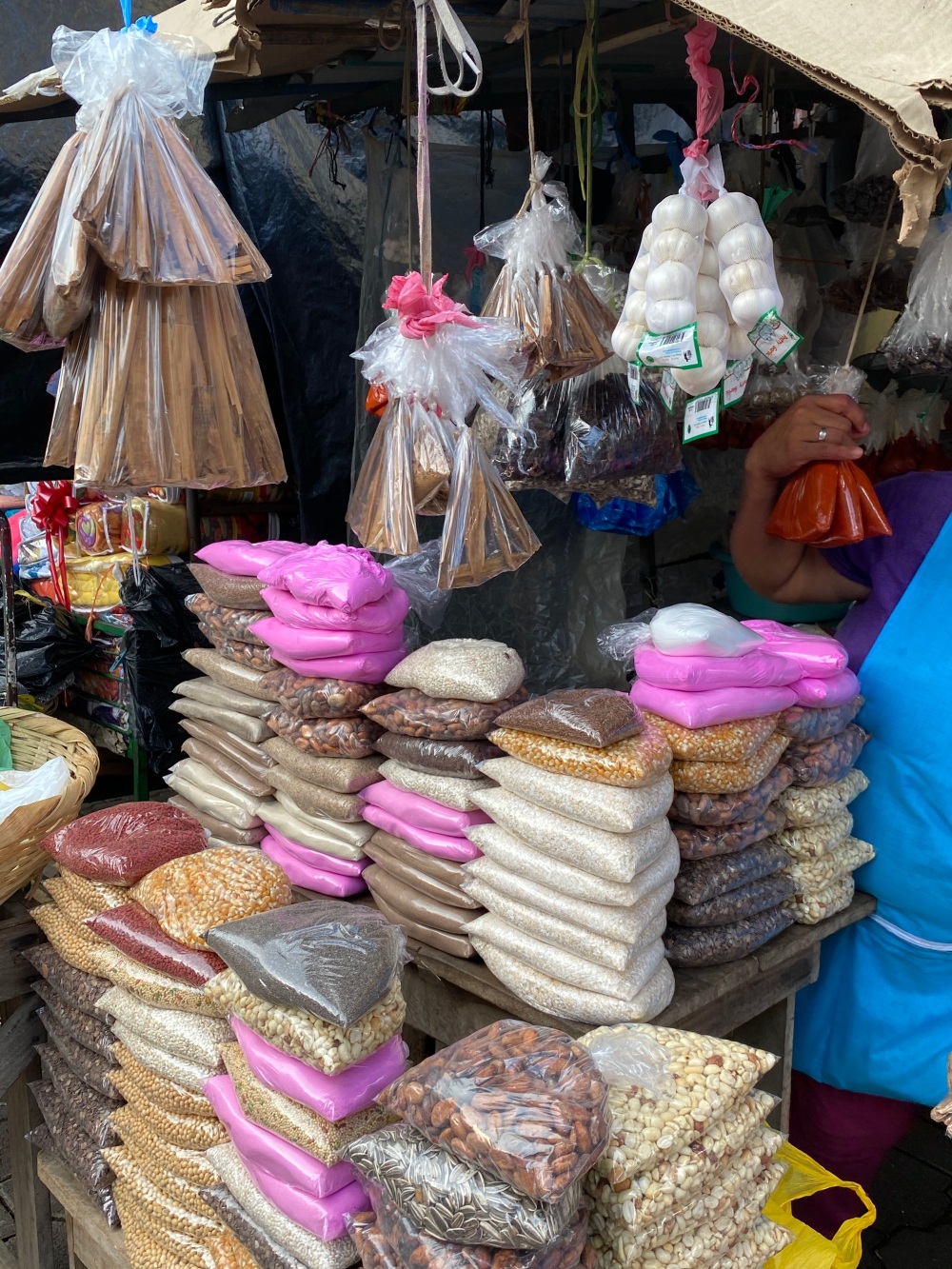 Tip: Don’t be fooled by the bright pink, ‘Cebada’ is not the best drink.. try it once and you’ll learn your lesson.

I miss Nicaragua food and markets already, there’s nothing like this at home!