I spent 3 weeks in Costa Rica this past January and visited many of country’s national parks (Arenal, Monteverde, Cahuita, etc.) and they were all beautiful.

The best experience I had was a 4-day trek with OsaWild through Corcovado N.P.— a national park accessible by tour only.

If you do nothing else in Costa Rica, do this tour.

And while it was overpriced (some $700 or $800 for a 4-day trek, that was in reality, a 3 night, 2.5 day trek with meager accommodation), the animal sightings were incredible. So, it was worth it overall.

Our first ‘day’ began at 3 or 4pm, we drove from Puerto Jimenez to a private reserve just outside of the park near Los Patos. There, we checked into nice accommodation– queen-sized cabins with private bathrooms. My group of 4 shared dinner together, then went out for a night-hike. 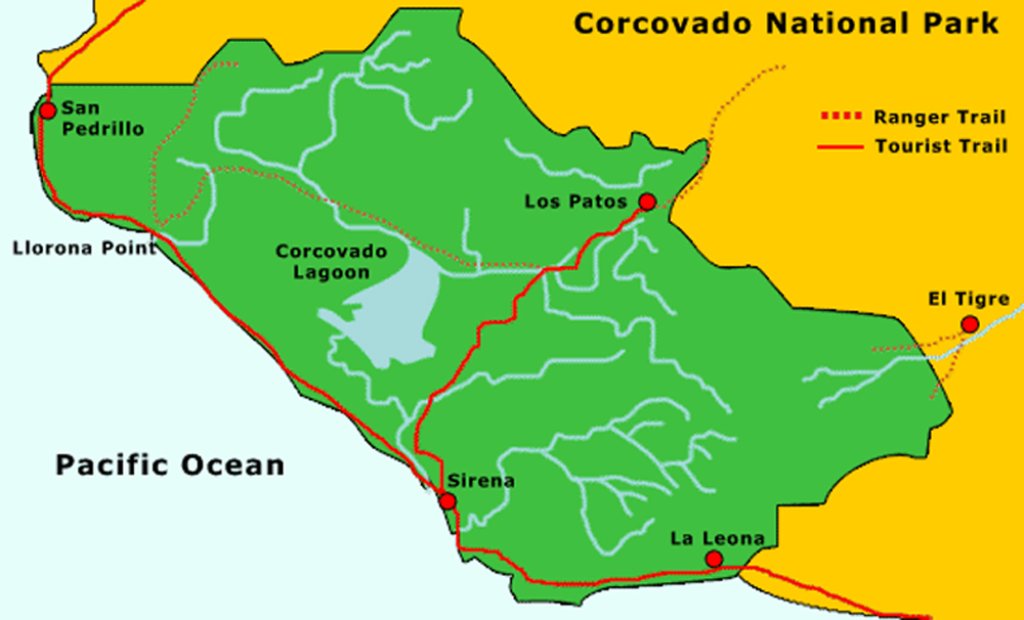 While night-hikes are allowed in other N.P.s, they’re strictly forbidden in Corcovado. However, since we were on a private reserve just outside the park area, we were allowed. We waded up the river, keeping our eyes peeled for nocturnal animals.

We were engulfed by the sounds of the jungle, it was as if we were surrounded by an orchestra of cicadas, frogs, and birds.

We locked eyes with a deadly Fer-de-Lance snake, whose venom can kill in just 4 hours.

Further down the river, we spotted this gorgeous poison dart frog.

We turned a cornered a startled a basilisk lizard, or ‘Jesus Christ lizard’, which immediately darted away, running ON water on two legs. I couldn’t believe my eyes! In a flash, it disappeared into the night.

And of course, we saw several giant spiders, bigger than I could stretch my hand.

The night hike was not for the faint of heart!

I woke up at 5am to the sound of toucans outside my window. With an alarm like that, I knew that it was going to be a good day!

We hit the trail at sunrise, with the goal of making it to Sirena by dinnertime. It was a 28km trek, and one of the most challenging hikes of my life.

As we hiked into the park, our guide began to point out interesting plants– trees with no rings, trees that ‘walk’ several inches a year, plants that recoil when touched… Everything was massive, I felt small underneath 500 year old trees, nature’s skyscrapers.

We walked around massive anthills where millions of Leaf-cutter ants must live! Our guide demonstrated, gently picking up a large solider ant, how ants can carry over 1000 times their weight. For over 3 seconds, this powerful insect was able to support the weight of her baseball cap before letting go. Mind-blowing.

After a few hours I was completely drenched, and we weren’t even 1/4 of the way to our destination.

In the late morning, lazy monkeys began to play in the treetops, some of them came down low enough for us to observe them. There are four species of monkeys in Costa Rica, and we saw three: White-faced Capuchins, Spider monkeys, and tiny Squirrel monkeys.

They often take other animals’ food, eggs and babies, and eat them. They’ll even push sloths out of trees, just for fun!

Spider monkeys are easy to spot because of their huge white testicles (not pictured), which contrast with their black and reddish fur.

They have really long arms like orangutans, and were really active, swinging around through canopy as we continued our hike.

We also saw a golden orb spider, some coatimundis and a Great Curacao bird, which whistled and hummed as we walked by.

After 10 and a half hours of hiking, we arrived to ‘base camp’ at La Sirena (The Manatee). Compared to our acomodation the night before, this was AWFUL. We had to sleep in 50-person dorms, it felt like a war hospital and was full of snoring people. After an entire day of hiking, I wanted and was expected something a little nicer, but was so exhausted it didn’t even matter. I was soon sound asleep.

We spent the day walking around the La Sirena area, looking for mega-fauna. By the shore we spotted egrets, herons, and alligators, but the real surprise was when we spotted a sleeping tapir, neck-deep in black mud.

We later came across a ‘branchbird’ or ‘Potoo’, a nocturnal, motionless, camouflaged bird. It was so still, it looked as if it died 100 years ago and had become petrified.

We also spotted a Bradypus sloth, which is always a delight. Look at those ‘toes’!

We stopped for a lunch break, and were planning to hike for a couple more hours before sunset.

To our surprise, a tapir had stumbled right into base-camp and was grazing happily only 20ft away from our dormitory.

The tapir eventually trotted off, and we delved into the forest again.

In the twilight, we spotted a yellow- bellied Trogan.

Our last full-day concluded with a burning sunset over the Pacific ocean, and a sighting of two peccaries in the distance, small wild pig-like mammals.

We woke up 4am, in order to make it to La Leona before high tide. If we didn’t make it to the crossing in time, we’d be stranded for 3 hours– extra time didn’t sound like a bad idea, but I had no choice but to follow.

Walking in the dark was really incredible, because, like the night hike on the first night, we were surrounded by the music of nature. Little pairs of eyes stared at us from the abyss as we stumbled through.

We came out of a clearing and onto the beach and I was stunned. The entire sky was lit up with stars and swirled with nebulae. We no longer needed our flashlights as we  traversed the shore.

As the sun rose, Scarlet Macaws began to fly around the palm trees, flapping their wide wings and squawking. My camera skills aren’t quite good enough to catch them in flight, but I managed to find one perfectly perched.

It made me so happy to see this classic bird out living its life in the WILD and not in a cage at a pirate-themed cafe in Florida or Puerto Rico.

The monkey-children found us interesting and tried to get closer, but their mothers pulled them back. It was so cute to watch them interact so similarly to the way humans do, but also a little bit strange. This little Capuchin stuck its tongue out at me!

We sadly didn’t see any extremely rare Jaguars or Giant Anteaters, but I’d say overall the trek was a success.

We made it across before high tide, and just in time for lunch and swim in the Pacific before a shuttle took us back to Puerto Jimenez.

If you have only a short amount of time in Costa Rica, I highly recommend this tour with OsaWild, and my guide, Caroline.